The news is not good for a country that is the second most populous nation in the world. A report by the Indian Space Research Organization (ISRO) says that land degradation now affects 96 million hectares (237 million acres) or 30 percent of India’s agricultural lands, reports Reuters.

“As a country, we should be more than alarmed by this data,” said S. Janakarajan, chairman of the South Asia Consortium for Interdisciplinary Water Resources Studies. “There is no coherent plan to reverse this process or its impact,” warning there may be no turning back.

Using data from Indian Remote Sensing (IRS) satellites, an analysis of the mapping shows new areas in the northern state of Jammu and Kashmir and eastern Indian states like Orissa and Jharkhand are turning arid, or undergoing desertification. Basically, this means the land is losing its productivity.

In some states, like Jharkhand, Rajasthan, Delhi, Gujarat and Goa, more than 50 percent of the land is under desertification.
“Population pressure has resulted in over-exploitation of land for cultivation, grazing, water resources and deforestation leading to degradation of drylands,” Indian minister Jitendra Singh wrote in the report. 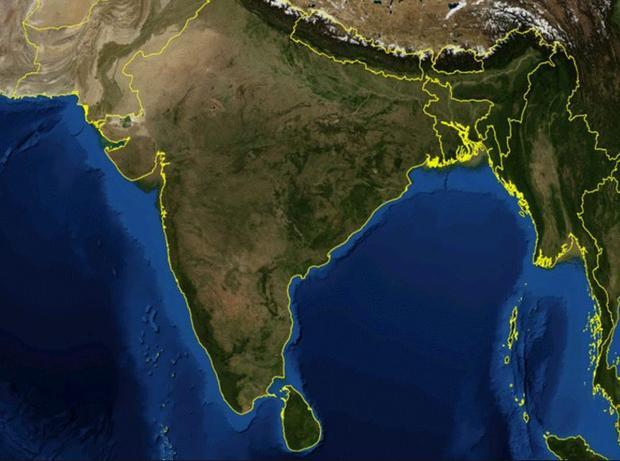 Satellite mapping really helps to show where land degradation is occurring in India.
University of Omaha

A.S. Rajawat of the Space Applications Center told the Thomson Reuters Foundation that the atlas compiled by the ISRO contains mapping images covering an eight-year period of study. He added, “This is the first time we are looking at a digital atlas of degradation and it is pointing at newer areas undergoing desertification.”

Land degradation is an ongoing issue
This is not the first time the world has learned about the loss of agricultural lands in India. In 2014, the government issued its fifth National Report on Desertification, Land Degradation, and Drought. At that time, it was determined that loss of productivity was affecting 25 percent of the country’s agricultural lands or 82 million hectares.

India even submitted the report to the Secretariat of the UN Convention to Combat Desertification, of which it is a member. But India conceded that land degradation continued to be a major environmental concern for the country with serious implications for sustainable development.

India is the second largest producer of rice and wheat and the leading producer of a variety of fruits including lemon and bananas. Ecologists and the Indian government should be very concerned over what is happening. If desertification continues at its current alarming rate, we could see a dire lack of staple foods leading to global famine.