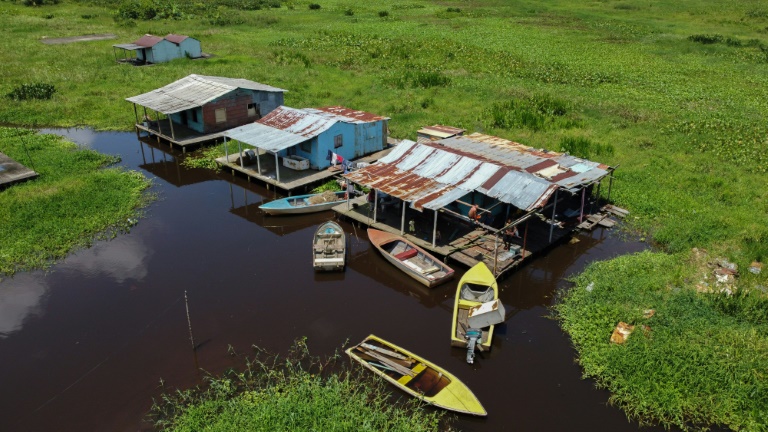 Congo Mirador was once an idyllic spot: a community of homes on stilts that seemed to float on the calm waters of a lagoon in western Venezuela. Now, the community is inundated with mud, a victim of silt generated by the Catatumbo river.

Most of its residents have left, and Congo Mirador is slowly fading away.

The river’s source is in Colombia, and it flows into Venezuela’s Lake Maracaibo, one of the biggest lakes in South America.

The Catatumbo’s path has been diverted numerous times over the years, slowly sending muddy sediment, plant life, tree branches and other debris into the village — to the point where it has been overwhelmed by the mess.

Where once there were fish, now there are weeds.

“There was a magnificent lake, and now it’s become a jungle,” laments Euclides Villasmil, one of the few residents of Congo Mirador who has remained there.

Only about 10 families, out of 200 who once lived there, are still in their homes. The village once was buoyant and loud; now, it’s dead quiet.

No one knows exactly when the invasion of Congo Mirador actually began, but residents say sedimentation was already starting to ruin the pristine waters back in 2013, when tiny mud islands formed.

An aerial view of the village captured by a camera drone leaves the false impression that Congo Mirador exists in the middle of a lush green field — in fact, it’s a swamp and life is increasingly difficult.

Along with the mud, there are snakes, toads and other creatures, and parasites that have progressively changed the ecosystem to such an extent that the village is a ghost town.

Only a few pillars remain of the medical clinic that once served the village’s 700 residents. Some homes have been ransacked, stripped of anything of value: from the doors to the windows, even the faucets and pipes.

Some people even dismantled their homes to rebuild them on a neighboring lagoon.

Janeth Diaz, 59, is among those who abandoned her home. She now lives in Puerto Concha, a three-hour journey by boat from Congo Mirador, which she reminisces about fondly.

“June 1, 2016 was one of the saddest days of my life,” she said, referring to the date she left the village.

Diaz says Congo Mirador was her “little Venice” where “we were all one big family.”

But when the mud came, she said, “I felt like it had a hold on me.”

Her mother died only a few months after they left Congo Mirador.

Douglas Camarillo, 62, refuses to leave. Submerged in mud up to his chest, with sweat on his brow, he spent two weeks clearing a path of just 130 meters (yards) so that he and his neighbors could use their boats.

“I’m not going to let my village die. As long as I am alive, the village will not die,” he pledged.

The church has remained intact, even if it’s been several years since anyone celebrated Mass there.

A rusted chalice sits atop the altar adorned with plastic flowers that have survived the ravages of time, all under the watchful gaze of a statue of Our Lady of Mount Carmel, the patron saint of seafaring communities.

The exodus from Congo Mirador has made life even harder, as the power plant that provided electricity to the village has not been operational for years, and the telephone antenna does not work.

Fuel, which used to be nearly free in this oil-producing nation, has been hard to acquire and expensive in recent years as Venezuela spiraled into political and economic uncertainty.

“My mother died in Maracaibo, two (of my eight brothers) and myself could not go to her burial because we didn’t have any gas,” said Erwin Gotera, 33, who was born in the area.

Gotera, a father himself, says half of what he makes from fishing is now used to pay for fuel.