Aircraft have confirmed the core of Hurricane Willa has now passed over the Islas Marias, an archipelago off central Mexico’s Pacific coast. While the storm has been downgraded to a Category 4 hurricane, it is still considered to be extremely dangerous, according to the National Hurricane Center. 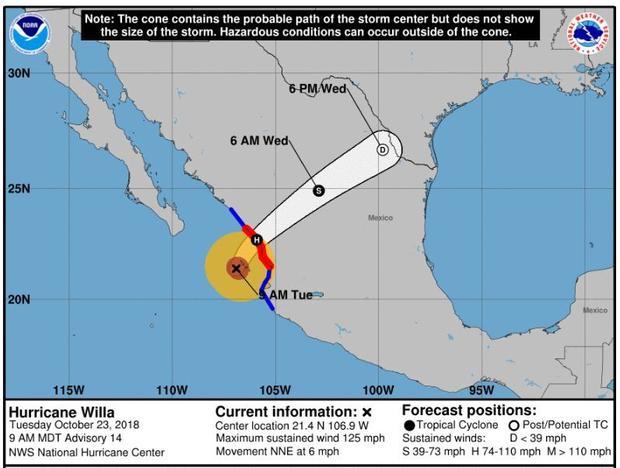 Mexican officials are reporting that further south, there have been 12 deaths related to heavy rains from Tropical Storm Vicente, according to CBS News.

CBS News Radio reporter Adrienne Bard is reporting that Hurricane Willa will be the strongest storm to hit Mexico’s Pacific Coast since Hurricane Patricia roared ashore in southwestern Mexico as a Category 5 storm in October 2015.

The NHC is warning that Willa could bring 6 to 12 inches of rain — with up to 18 inches in some places — to parts of Jalisco, Nayarit and Sinaloa states, with flash flooding and landslides possible in mountainous areas. After hitting the Islas Marias, Willa is expected to blow ashore in the late afternoon somewhere along a 140-mile stretch from Mazatlan to San Blas.

How Willa could impact the U.S.
Parts of central and eastern Texas are already soaked with rain, but Willa is expected to dump an additional 4 inches on the Lone Star State as it heads across the country to the Atlantic Ocean. CNN meteorologist Monica Garrett says, “If rain falls heavy enough, flash flooding could become an issue.”

But Willa will continue to march to the southeast, dumping another 2 inches or so – with areas around the Gulf Coast being hit the hardest, according to Garrett. Finally, after reaching the Atlantic Ocean, Willa is expected to get a “make-over.” And this may not be good.

Tropical Moisture streaming ahead of major hurricane Willa off the western Mexico coastline is interacting with a frontal boundary in the Gulf Coast. Locally heavy rain is possible in Texas, which could exacerbate ongoing flooding. pic.twitter.com/E48wjdCvhP

According to CNN Meteorologist Brandon Miller, “The storm will encounter colder air, which will transform from a tropical area of low pressure to a more wintertime-like storm system.”

“If the low pressure tracks up the East Coast of the US, it could become the season’s first nor’easter. This would bring significant amounts of rain and wind Saturday and Sunday in cities like Washington, D.C., Philadelphia, New York City and Boston,” He said.

As for snow, coastal regions will probably avoid the white stuff, but inland, some areas may not be so lucky. “Exact impacts will depend on the particular track the storm takes up the East Coast, and some models take the system farther out to sea, which would minimize the wind and snow/rain amounts,” Miller said.

“Either way, it appears that Hurricane Willa will have a second life over the United States, though the impacts will be much different than those it is bringing to the Pacific Coast of Mexico.”