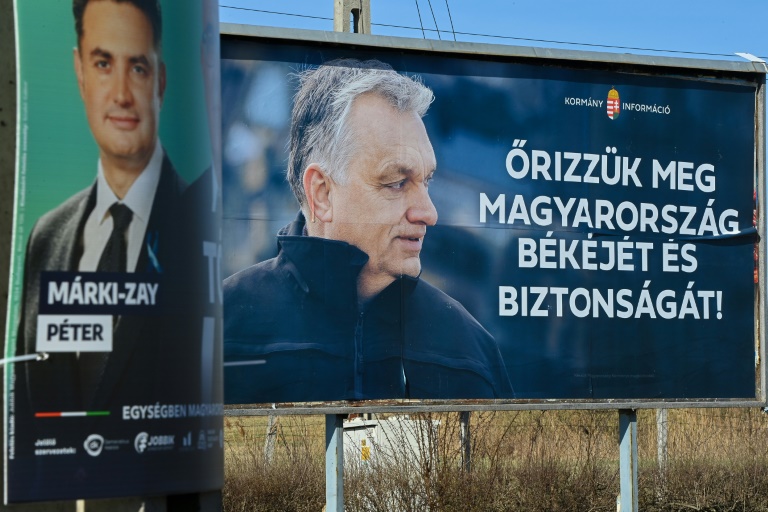 After a tense campaign dominated by Russia’s invasion of neighbouring Ukraine, Hungarians will vote in a general election on Sunday with polls giving the edge to incumbent nationalist Prime Minister Viktor Orban.

But for the first time in its 12 years in office Orban’s Fidesz party will face a united opposition coalition.

Fidesz’s poll lead is narrow and “all options are on the table”, Bulcsu Hunyadi, analyst with the independent Political Capital institute, told AFP.

Hunyadi says the “mobilisation in the last few days” will be key in turning out the estimated half a million undecided voters in the country of 9.7 million.

On Friday Orban, 58, will hold a final rally in the town of Szekesfehervar, less than a hour from the capital Budapest, while his rival from the opposition coalition Peter Marki-Zay will hold his last event in the capital on Saturday, just a few hours before polls open the next morning.

Orban will doubtless use the opportunity to drive home his message that he represents “peace and security”, in contrast to the “dangerous” opposition — slogans which chime with Fidesz’s huge election posters.

While going along with support for Kiev at an EU level, Orban’s government has refused to let weapons for Ukraine cross its territory and, says Hunyadi, has managed to boil the war down “to one very basic question: whether Hungary should be involved or remain out”.

“This message has been much more effective than the opposition’s criticism of the government” for its closeness to Russia.

Added to this is the fact that “Fidesz’s propaganda machinery is far more effective than the opposition’s capability to reach voters”.

Other critics point out that reforms to the electoral system over Fidesz’s time in office have also benefited the party.

The government dismisses such worries.

As for Marki-Zay, Kovacs insists he is a mere “figurehead who has no party” and no MPs.

Conservative Marki-Zay gained prominence by defeating Fidesz to become mayor of the town of Hodmezovasarhely but has had the tough task of leading a coalition of parties ranging from the right-wing Jobbik through to liberals, greens and social democrats.

They’re united by the goal of removing Orban and dismantling the “illiberal” model of democracy Fidesz has built since 2010, prompting repeated run-ins with Brussels.

The choice before Hungarians “has never been so simple”, says Marki-Zay, 49.

He says the country must choose the path “of Europe, not of the East”, an allusion to the government’s rapprochement with Moscow and Beijing.

Orban’s government has also hit back at Ukrainian President Volodymyr Zelensky, who singled Orban out for criticism over his close ties to Russian President Vladimir Putin.

In return the Hungarian government has accused Ukraine of attempting to interfere in Sunday’s election.

Hungary’s neutral stance on the war has left it at odds with even traditional allies such as Poland which have adopted an explicitly anti-Russian position.

But according to Kovacs, when it comes to defending Hungary “if the price is isolation… then the PM is ready to go for it”.

While Kovacs said he “respected” Poland’s view that Russian gas imports could be phased out by the end of the year, he insisted there was no feasible way to make Hungary less dependent on them.

He presents Orban as the seasoned “doyen of European politics” and boasts of the “economic and social success” Hungary has enjoyed over the past 12 years.

The opposition however says Fidesz’s “irresponsible” economic management has left the country ill-equipped to combat galloping inflation and the effects of the weakness of Hungary’s forint currency against the euro.

However, while these measures were meant to be Fidesz’s “secret weapon”, “the problem… is that inflation is eating it up”, Andras Biro-Nagy, analyst at Policy Solutions institute, told reporters this week.

The election will be held at the same time as a referendum on LGBT issues amid criticisms that a law passed last year was homophobic.

The polling will for the first time be monitored by a team of more than 200 international observers who will monitor the fairness — or otherwise — of the vote.

In this article:Hungary, orban, Vote