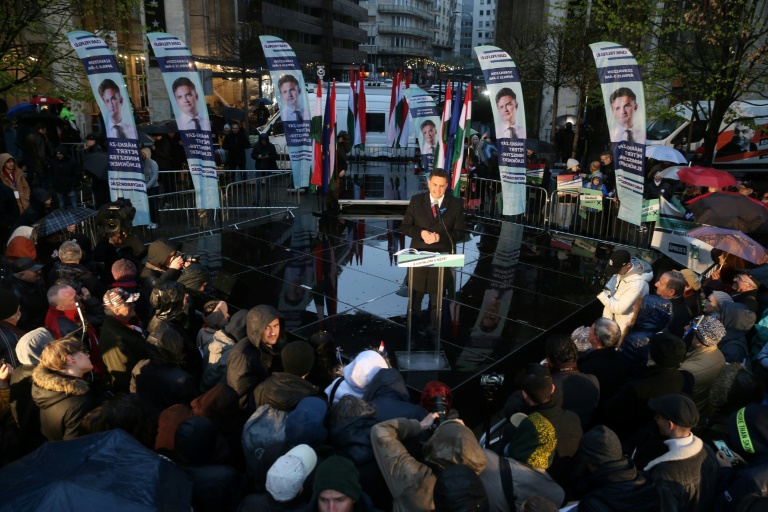 Nationalist Hungarian Prime Minister Viktor Orban faces a tough challenge with a united opposition in an unpredictable general election Sunday, after a campaign dominated by Russia’s invasion of neighbouring Ukraine.

The six main opposition parties are for the first time fielding a joint list, determined to roll back the “illiberal” revolution Orban’s Fidesz party has pursued during its 12 consecutive years in office.

That has involved repeated confrontations with EU institutions, including over the neutering of the press and judiciary, and measures targeting the LGBT community.

While admitting the election was “an uphill battle” given what he called “12 years of brainwashing” under Fidesz, he insisted the opposition alliance stood “at the gates of victory”.

However, government spokesman Zoltan Kovacs says a definitive picture of the results will likely only emerge between 11 pm and midnight.

Turnout is expected to be high, surpassing 70 percent.

The capital is seen as favourable territory for the opposition.

However, it’s in around 30 less-urban swing seats out of the 106 directly elected constituencies that the election will be decided.

Marki-Zay has been crisscrossing these areas in recent weeks to reach voters directly and try to break through government “propaganda”.

At his rally on Saturday, he cut an approachable figure, wading into the crowd to take selfies with supporters.

By contrast, Orban has been “hidden”, with no open events save a final rally on Friday, says Andras Pulai of the opposition-leaning Publicus polling institute.

Instead, Orban preferred “closed events where he talked to his most loyal supporters and could not be approached by journalists”.

Publicus’ last pre-election poll, published on Saturday, put Fidesz and the opposition neck-and-neck, while other pollsters have given Fidesz a narrow lead.

However, given the advantage Fidesz enjoys under the electoral system, “the opposition needs to have a three-to-four point lead to win a majority” in the 199-seat chamber, Pulai points out.

He cautions that the votes of Hungarians abroad constitute another unknown factor making the vote “too close to call”.

“Anything can happen,” he says.

At his rally on Friday, Orban urged a strong turnout, reminding his audience of his shock defeat in 2002 after his first term as prime minister.

That came despite a lead in the pre-election polls.

As Orban told his supporters on Friday, “the war (in Ukraine) changed everything” for the campaign.

In the wake of the Russian invasion, Orban went along with EU support for Kyiv despite his longstanding closeness to Russian President Vladimir Putin.

However, domestically Orban has struck a neutral and even at times anti-Ukrainian tone, and has refused to let weapons for Ukraine cross Hungarian territory.

He has presented himself as the protector of peace and stability as opposed to a “warmongering” opposition whom he alleges would immediately boycott vital Russian energy imports and drag Hungary into the conflict.

For his part, Marki-Zay has tried to frame the vote as “a clear choice: Putin or Europe?”

In a sign of the attention the vote is receiving abroad, former US president Donald Trump felt moved to endorse Orban earlier this year while Trump’s 2016 opponent Hilary Clinton has urged Hungarians to vote to “fight autocracy”.

As well electing their MPs on Sunday, Hungarians will vote in a referendum posing four questions designed to elicit support for a law banning the portrayal of LGBT people to under-18s.

“Mothers are women, fathers are men, our children must be left alone, our families must be protected,” Orban said at Friday’s rally, where he also railed against “gender madness” in the West.

Human rights activists have called on voters to put a cross in both the “yes” and “no” boxes in order to reduce the number of valid ballots and thereby invalidate the referendum.

The Hatter Society, an LGBT rights organisation, branded the referendum “vicious” and an attempt to exploit “hatred of a vulnerable minority”.