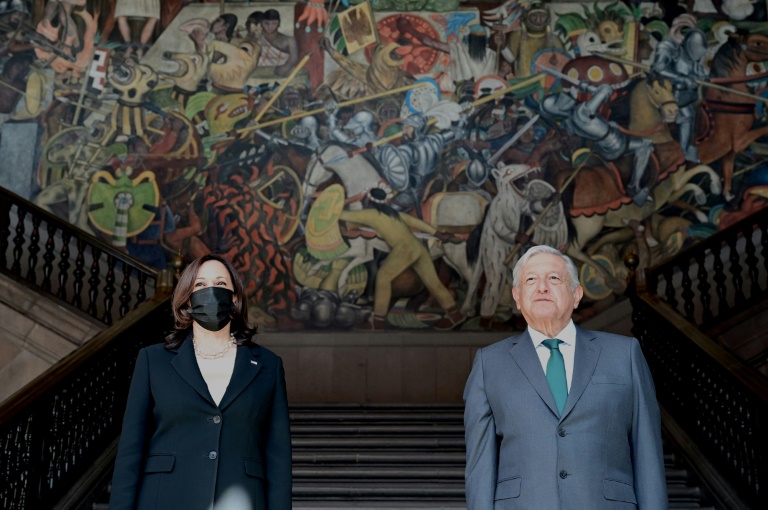 The two leaders witnessed the signing of a memorandum of understanding between their countries on cooperation in aid and development in Central America, including youth empowerment programs.

“The United States and Mexico have a longstanding relationship,” Harris said at the start of the meeting.

“I strongly believe that we are embarking on a new era,” she added.

She told reporters afterward that the talks were “direct and candid,” describing the meeting as “very productive” on issues including security, migration and drug-smuggling.

“We made clear that the United States considers Mexico to be a partner on these issues,” she said.

Lopez Obrador tweeted that the talks were “important, beneficial for our peoples and very pleasant.”

Harris, on her first trip abroad as President Joe Biden’s deputy, has said she wants to give Central Americans “a sense of hope” that their lives will improve in their countries.

Detentions of undocumented migrants, including unaccompanied minors, along the US-Mexico border hit a 15-year high in April, with nearly 180,000 people intercepted, according to the US authorities.

“There’s not going to be a quick fix,” Harris said in an interview with NBC News broadcast on Tuesday.

Asked why she had not visited the US-Mexican border personally since taking office, Harris said her focus was on dealing with the reasons behind the migrant flows.

“It is my firm belief that if we care about what’s happening at the border, we better care about the root causes and address them. And so that’s what I’m doing,” she said.

Biden’s special envoy Ricardo Zuniga told reporters that the memorandum of understanding between the two countries would have a “real focus on youth and reforestation.”

“Nobody leaves their towns, abandons their families and leaves their customs for pleasure,” he told reporters ahead of the talks with Harris.

“Things are not solved with coercive measures. You have to give options, alternatives.”

Harris’s visit is part of the Biden administration’s promise of a more humane immigration policy — in contrast to the hardline approach taken by his predecessor Donald Trump.

Biden is allowing unaccompanied children to stay and be united with relatives living inside the United States, while urging undocumented migrants not to come.

“The United States will continue to enforce our laws and secure our borders… If you come to our border, you will be turned back,” Harris said in Guatemala on Monday.

The Republican opposition has accused Biden of creating a “crisis” on the country’s southern border by failing to rein in migration.

One issue that may come up in the talks in Mexico is calls to end “Title 42,” a Trump-era coronavirus policy allowing the immediate deportation of undocumented migrants — even those who arrive seeking asylum.

Trump sparked anger during his 2016 election campaign when he branded Mexican migrants “rapists” and drug dealers, and vowed to build a wall across the southern US border as part of his hardline immigration stance.

“Down the road, if we get to a point where the migration situation is less of a crisis, then we may see more pressure from Washington on Mexico City on a whole range of issues,” he said in a panel discussion.

But “we’re not going to see any repetition of the past four years of the Trump administration with aggressive public statements and threats,” he added.

In this article:kamala harris, Mexico, Migrants