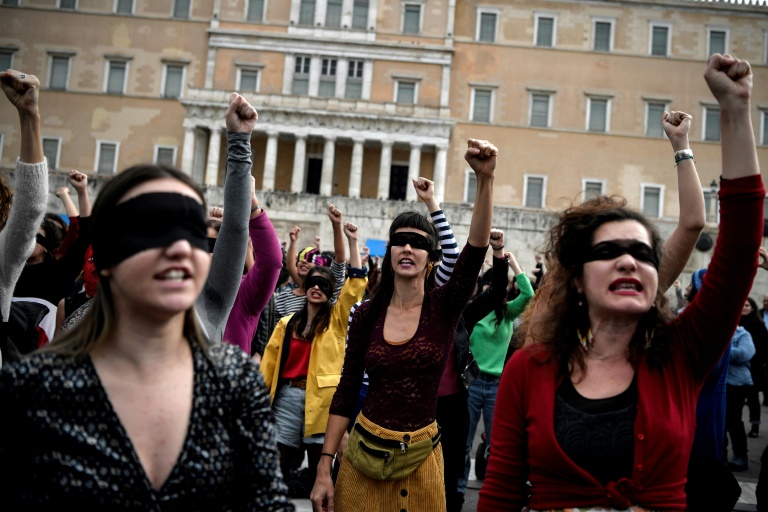 As a group of senior Greek coastguard officers sat down for a routine video call last June, the meeting opened with femicide jokes.

“I told my wife, you better behave or I’m getting a pilot’s licence. She froze!” sniggered one officer in a video leaked this month by a local news portal after a Greek helicopter pilot murdered his wife last May.

“That’s the way to teach them, my friend,” replied another participant.

“Didn’t all little girls want to marry pilots when they were young?” laughed a third officer.

The men were mocking the murder of 20-year-old Briton Caroline Crouch by her Greek husband, Babis Anagnostopoulos, as she slept.

For over a month, he tried to present it as a botched burglary before confessing to the crime that sparked outrage in Greece.

Crouch’s killing was one of dozens of similar cases in Greece in recent years, including the gruesome rape and killing of American scientist Suzanne Eaton on the island of Crete in 2019.

She added that a special hotline for abuse complaints had received nearly 7,000 calls last year.

A belated #MeToo awakening in Greece has shed more light on abuse of women in the country.

But Greek activists say the conservative country has yet to fully dismantle traditional, patriarchal attitudes that lead to violence against women, while many have called for a separate crime charge for femicide.

“A young girl (growing up) in Greece has centuries of tradition to deal with,” Orfanidou told AFP.

“Greek education, the church and justice are conservative institutions built on the patriarchal model,” she adds.

Koumandou says her mother, who gave up studying dentistry to avoid “offending” her marble mason husband, would say women “should not talk much”.

“We were taught not to display too much intelligence,” notes Orfanidou.

Greece first gave women the vote in 1952, and in 2020 elected its first woman head of state, former judge Katerina Sakellaropoulou.

But conservative Prime Minister Kyriakos Mitsotakis — whose sister was Greece’s first female Athens mayor and foreign minister — has just two women ministers in his cabinet of 21.

Beatings of women were common in film a few decades ago — frequently for comic relief — while so-called honour killings over jealousy and adultery featured in popular song lyrics.

“In my school dance group, a folk song about a man who butchers his wife and then mourns her was among our favourites,” recalls Orfanidou.

Many Greek films from the 1950s to the 1970s, considered the golden era of domestic cinema and routinely replayed on television, promote the bourgeois family model with the man at the head of the household, says Fotini Tsibiridou, a social anthropologist at the University of Macedonia.

In a 1966 hit comedy that sold over 420,000 tickets, the protagonist lines up his six sisters and slaps them for bickering.

“I want to be caressed and slapped by the man I love,” says a song from the same era.

“For instance, you won’t see a man buying or using house cleaning products in a Greek TV ad,” she says.

In 2016, Greece’s leading toy chain Jumbo sparked controversy with an advertisement featuring the line “hit like a man”.

In another tongue-in-cheek advertisement from a cell phone chain in 2011, a man, unhappy with his wife’s cooking, daydreams about returning her to her mother.

Critics also note Greek law penalises victims of domestic violence by giving lighter sentences to perpetrators who can prove they were in a state of agitation during the crime.

Proof of being in what the penal code calls “a fit of rage” can mean the difference between a life sentence and a reduced term.

This is the line of defence used by Crouch’s husband Anagnostopoulos, whose lawyer this month told reporters that his client “was in a state of psychological arousal” when he committed the crime “in the heat of passion”.

A few days after the coastguard video mocking Crouch’s death leaked, the merchant marine ministry condemned the comments through an anonymous source. No official statement was issued.

In this article:Crime, Greece, Rights, Women