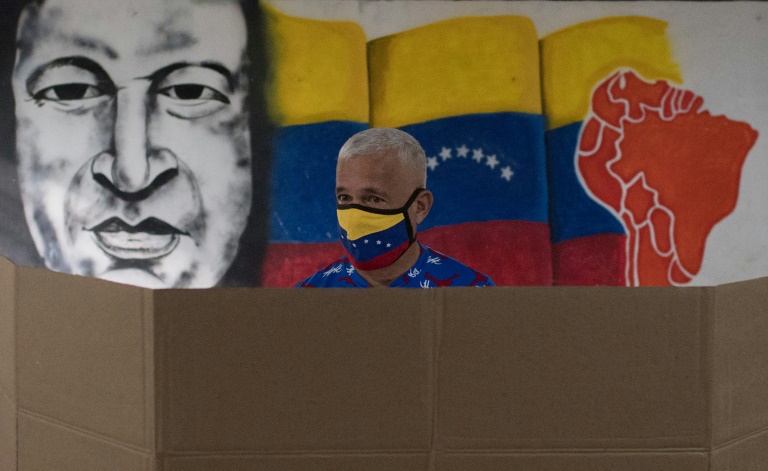 The government of President Nicolas Maduro, whose 2018 election is not recognized by part of the international community, won a landslide victory in Sunday’s regional ballot, which brought opposition parties to the polls in Venezuela for the first time since 2017.

The vote for governors and mayors, overseen by European Union observers who returned to the country after a 15-year absence, was a major litmus test for Maduro’s government in a country crippled by international sanctions and economic crisis. The EU mission will present a report on Tuesday.

The long queues of voters at polling booths in the capital Caracas presented a very different picture from elections for president in 2018 and for parliament two years later that were boycotted by the opposition.

“We, the revolutionary forces, have won 21 (states), including the capital of the country… Beautiful triumph, beautiful victory,” Maduro said of the results.

The polls drew a voter turnout of 41.8 percent, with 8.1 out of a possible 21 million voters casting a ballot according to the National Electoral Council (CNE).

Candidates aligned with Maduro won 20 of the 23 governor posts and the mayorship of the capital Caracas in the face of a divided opposition running in an election for the first time in three years.

Weakened and fragmented, the opposition was only able to win in three states, although this significantly included oil-rich Zulia, the most populated region in the country whose capital Maracaibo is Venezuela’s second-largest city.

Leftist Maduro, whose deeply controversial presidency has seen the South American nation targeted by punishing economic sanctions, has sought a relaxation of the punitive measures through careful shows of goodwill and democratic intent.

With hundreds of millions of dollars of its funds frozen abroad, Venezuela wants to be able to sell its petroleum more easily — the United States is historically its biggest customer — and to end limits on imports.

The government has made a calculated series of concessions, opening negotiations with the opposition, and inviting election observers from the EU, the United Nations and the US-based Carter Center to witness Sunday’s vote in a bid to assert its legitimacy.

The opposition, which for the past three years had boycotted elections they said were neither free nor fair, agreed to take part after receiving assurances from the government.

Opposition leaders hope to raise their profile through participation, and to gain support ahead of presidential elections set for 2024.

Polling stations closed at 6:00 pm local time (2200 GMT), but those already in line were allowed to stay until they had cast their ballot — sparking claims of fraud from the opposition.

“Maduro and his party ordered the CNE (electoral body) not to close the polling stations when there were no voters… They are going to put votes that do not exist,” tweeted opposition figure Henrique Capriles, who has twice come second in presidential elections.

The head of the 130-member EU observer mission, Isabel Santos, said during the day that the election was proceeding “calmly,” and defense minister Vladimir Padrino told public television the election had taken place “in peace”.

One person was shot dead near a voting center in the country’s east, but the authorities said it was not related to the election.

On the eve of the vote, Maduro had warned that the EU had no authority to give a “verdict” on the process in a country that is prickly about its “sovereignty,” often accusing the United States of interventionism.

The United States is among dozens of countries which do not recognize Maduro’s presidency after the impugned elections of 2018 that opposition leader Juan Guaido claimed to have won.

Guaido had said the opposition must “unify the struggle” but indicated he would not vote as “it is certain that Maduro is, and will continue to be, illegitimate.”

Venezuela, a once-rich oil producer, is battling its eighth year of recession and hyperinflation that reached nearly 3,000 percent in 2020 and more than 9,500 percent the year before, according to central bank figures.

Three in four Venezuelans live in extreme poverty, according to a recent study, with the economic crisis made worse by US sanctions and the coronavirus pandemic.

Millions have left the country in recent years to try their luck elsewhere.