“With science still under attack and the climate threat growing, we’re launching our own damn satellite,” Brown said at the Global Climate Action Summit, a three-day conference that ended today in San Francisco aimed at strengthening emissions-reduction commitments from governments and the private sector.

“This groundbreaking initiative will help governments, businesses and landowners pinpoint — and stop — destructive emissions with unprecedented precision, on a scale that’s never been done before,” Brown told the crowd of political, environmental and business leaders, according to Reuters.

“Governor Moonbeam” keeps a promise
Governor Brown has made climate action a signature focus of his final two terms in office. At a scientific gathering in 2016 – in the face of potential cuts to federal satellite and climate monitoring programs under President Donald Trump, who is a climate denier, Brown promised California would launch a climate monitoring satellite.

Brown also served as California’s governor from 1975 to 1983 and ran for president three times. He has always advocated for renewable energy and climate action, as well as space exploration and state-sponsored satellites earlier in his political career. This earned him the nickname, “Governor Moonbeam,” from Chicago Tribune columnist Mike Royko in the 1970s.

The nickname has stuck with Governor Brown for decades, according to Fox News, even after Royko formally apologized for making up the name. And, as Fox notes, Brown has actually grown to like and embrace the name. 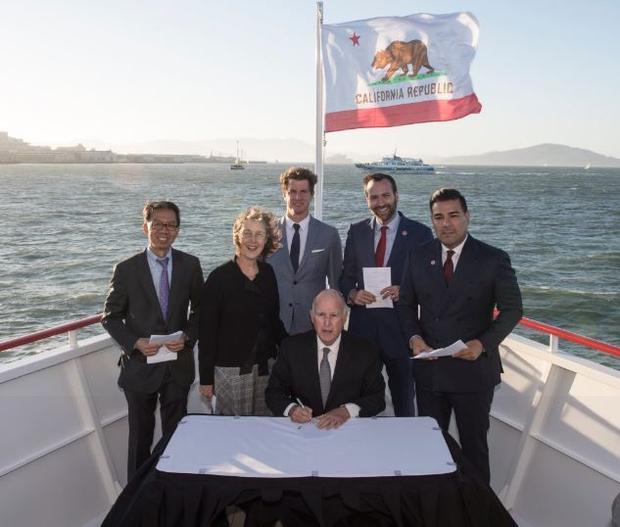 Brown told the crowd the satellite would be able to detect the origin of various climate pollutants, including “super-pollutants” that persist for less time in the atmosphere than carbon dioxide but have a more potent heat-trapping effect. The satellite will be developed and operated by a private company, San Francisco-based Planet Labs Inc., in collaboration with the state Air Resources Board.

Data from the new satellite will be shared with governments and other entities, the Governor’s office said in a statement, under a new initiative called the Climate Data Partnership with Environmental Defense Fund and others.

“The partnership has the potential to reduce emissions by 1,000 million metric tons a year, equivalent to taking 200 million cars off the road every year,” the statement said.

Initial funding for the satellite project has been provided by philanthropists Dee and Richard Lawrence and their Overlook International Foundation as well as The Jeremy and Hannelore Grantham Environmental Trust. Other business and philanthropic partners are joining the initiative.

We're excited to share a groundbreaking partnership with the State of California to explore the development of new satellite technologies that can help track climate change. Read about the initiative: pic.twitter.com/0BG7xka7ZW

In related news, the Japan Times is reporting America’s Pledge, the environmental group led by Michael Bloomberg and California Gov. Jerry Brown has formed a partnership with a Japan-based organization to promote learning, collect data and share strategies to curb global greenhouse emissions.

The group is called the Japan Climate Initiative and is made up of more than 200 firms, local governments, and nongovernmental groups, all committed to helping the nation to curb emissions. Some of the companies and groups include Ajinomoto Co., Fuji Film Holdings Corp., NTT Docomo Inc., the Tokyo Metropolitan Government, the city of Kyoto and WWF Japan.

“Local governments and the private sector are driving progress on climate change in the U.S. and around the world — and the America’s Pledge model gives them data and resources to accelerate that progress,” Bloomberg, who serves as the U.N. secretary-general’s special envoy for climate action, said in a statement.

“It’s encouraging to see this approach spreading to other countries, and we welcome this partnership with Japan,” he said.