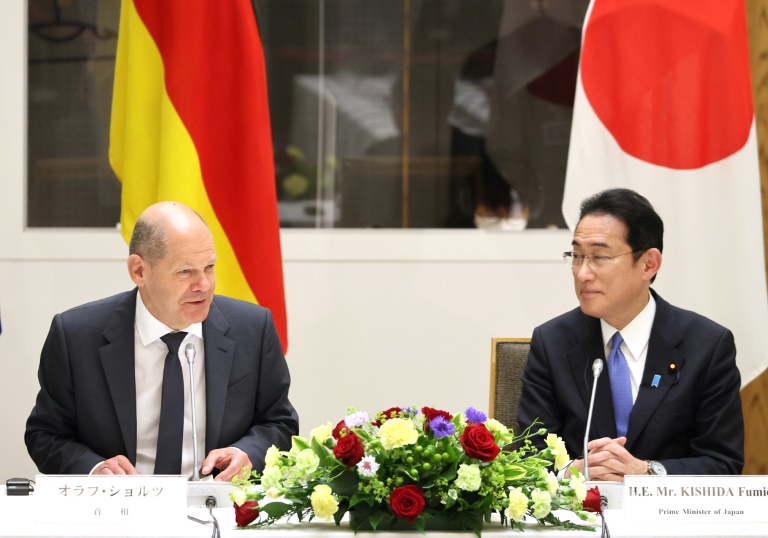 Chancellor Olaf Scholz on Thursday thanked Germany’s parliament for backing the decision to provide Ukraine with heavy weapons, as Russia said Western arms deliveries to the country were dangerous for European security.

Scholz, in Tokyo on his first official visit to Asia, did not address the Kremlin’s comments directly but said a plan to replace stocks sent to Ukraine from eastern European nations would get weapons in use as quickly as possible.

Japan and Germany, the world’s third and fourth largest economies, have sanctioned Russia over the war in step with fellow members of the G7, of which Berlin is the 2022 chair.

Tokyo has sent protective and humanitarian supplies to Ukraine, and Germany had sent defensive weapons until the government announced its policy shift earlier this week, which was approved by lawmakers on Thursday.

“I am very grateful for the clear support that the German parliament has given today to the policy of my government” for the delivery of heavy arms, Scholz said at a joint press conference with Japan’s Prime Minister Fumio Kishida.

Earlier, Scholz told business leaders that Germany is “supplying sophisticated weapons on a large scale to the warzone in Ukraine” and has “significantly expanded military support for our allies in central and eastern Europe, which enables them to help Ukraine with the weapons in a timely manner”.

Scholz and Kishida said they had agreed to bolster security ties between their countries, pledging to hold a second round of talks between their defence and foreign ministers after a first meeting last year.

During the pair’s discussions, the Kremlin said Western arms deliveries to Ukraine “threaten the security of the continent”, responding to a call by Britain’s foreign secretary for Kyiv’s allies to “ramp up” military production to help Ukraine

Kishida said he wanted to “pay my most sincere respects to the decision by Germany to make a huge policy shift on national security”.

Japan and Germany are both highly dependent on imported fossil fuels, and have so far held back on banning imports of Russian gas and oil.

But Scholz said his country had planned for a possible cut to its gas supplies by Russia.

“We can only prepare ourselves, and it’s what we had already started to do before the war,” he said, adding that it “makes no sense” to speculate on possible Russian actions.

In this article:Diplomacy, Energy, Germany, Japan