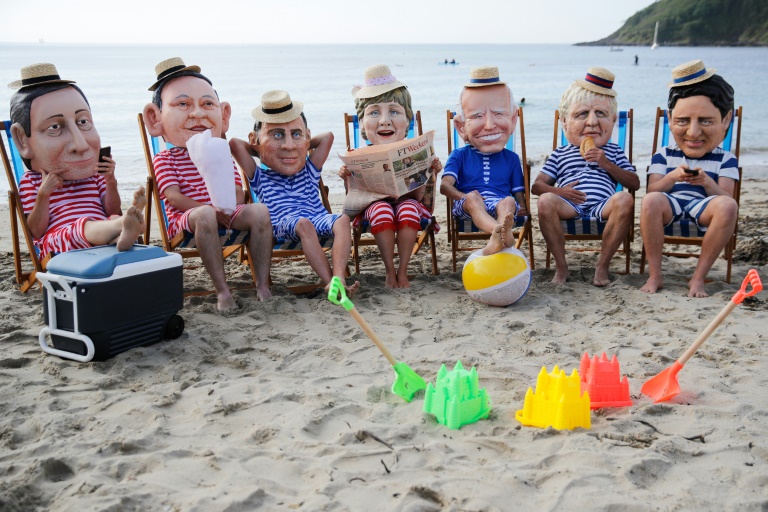 The G7 on Saturday unveiled US-led plans to counter China in infrastructure funding for poorer nations, and a new accord to prevent future pandemics, as the elite group sought to showcase Western unity at its first in-person summit since 2019.

Promising to “collectively catalyse” hundreds of billions of infrastructure investment for low- and middle-income countries, the G7 leaders said they would offer a “values-driven, high-standard and transparent” partnership.

Their “Build Back Better World” (B3W) project is aimed squarely at competing with China’s trillion-dollar Belt and Road infrastructure initiative, which has been widely criticised for saddling small countries with unmanageable debt but has included even G7 member Italy since launching in 2013.

Britain meanwhile hailed G7 agreement on the “Carbis Bay Declaration” — a series of commitments to curb future pandemics after Covid-19 wrecked economies and claimed millions of lives around the world.

The collective steps include slashing the time taken to develop and license vaccines, treatments and diagnostics for any future disease to under 100 days, while reinforcing global surveillance networks.

The G7 — Britain, Canada, France, Germany, Italy, Japan and the United States — will formally publish the pact on Sunday, alongside its final communique containing further details on the B3W.

“The #CarbisBayDeclaration marks a proud and historic moment for us all,” British Prime Minister Boris Johnson said on Twitter.

“Under this agreement, the world’s leading democracies will commit to preventing a global pandemic from ever happening again, ensuring the devastation caused by Covid-19 is never repeated,” he said.

World Health Organization chief Tedros Adhanom Ghebreyesus, criticised in some quarters for being too accommodating towards China where the coronavirus originated, welcomed the health pact.

However, aid charity Oxfam said the declaration “does nothing to address the fundamental problems that are preventing vaccines being accessible to the vast majority of humanity”.

The G7 leaders are expected to pledge to donate one billion vaccine doses to poor countries this year and next — although campaigners say the rollout is much too slow to end the crisis sooner.

The leaders are also set to issue new commitments on climate change, including financial aid for the developing world, in the buildup to the UN’s COP26 environmental summit in Scotland in November.

After a bracing dip in the Cornish sea for Johnson, and a brisk beach jog for Canadian Prime Minister Justin Trudeau, the leaders broadened their agenda Saturday to foreign policy issues.

They were joined by the leaders of Australia, South Africa and South Korea, with India taking part remotely.

“This is not just about confronting or taking on China,” a senior White House official said. “This is about providing an affirmative, positive alternative vision for the world.”

He said Biden would be urging “concrete action” on the forced labour accusations, calling them “an affront to human dignity, and an egregious example of China’s unfair economic competition”.

China denies allegations that it is waging “genocide” by forcing up to one million Uyghurs and people from other ethnic-Turkic minorities into internment camps in the region of Xinjiang.

The US president will also seek to address frayed relations with Moscow, in particular over its cyber activity.

Most of the G7 leaders will reconvene Monday in Brussels for a NATO meeting, before Biden heads on to his first summit with Russian President Vladimir Putin in Geneva, vowing to deliver a blunt message about Russian behaviour.

In a rare interview with US media released Friday, Putin voiced hope that Biden would be less impetuous than Donald Trump, who infamously sided with the Russian leader against the views of his own intelligence chiefs.

“It is my great hope that, yes, there are some advantages, some disadvantages, but there will not be any impulse-based movements on behalf of the sitting US president,” Putin told NBC News.

Closer to home for the G7 hosts, Johnson came under concerted pressure in separate meetings with the leaders of France, Germany and the European Union to respect his Brexit commitments over Northern Ireland.

He later said Britain will “not hesitate” to suspend a post-Brexit protocol governing trade there if the EU refuses to change tack.

Stressing the UK is a unified territory encompassing Northern Ireland, he told Sky News that “they just need to get that into their heads”.