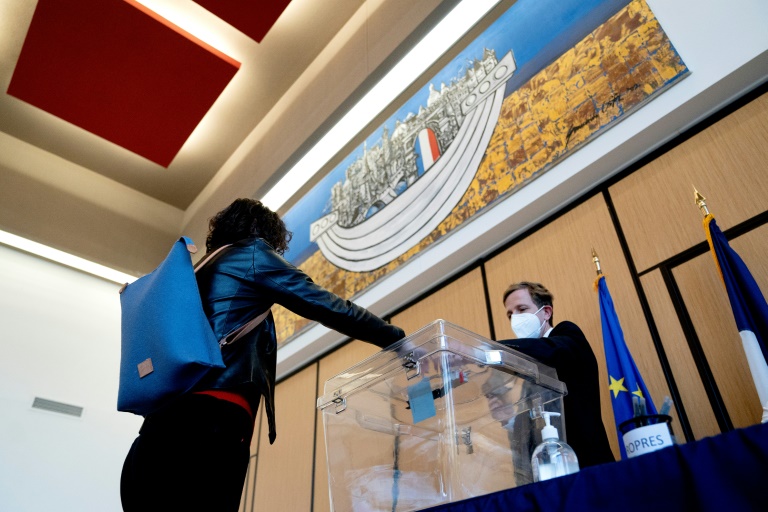 “This connects us to France”: All across North America, French citizens began casting their votes Saturday, a day ahead of the first round of presidential elections in France.

Nathalie Depastas has lived in the United States for 25 years, but would not have missed her vote for the world.

“I am interested to know which clown I will have at the head” of the country, quipped the medical specialist, based in the American state of Virginia.

Her choice was “obvious,” she said: someone who has “the interests of France at heart.”

At France’s embassy in Washington, where Depastas was voting, many took a moment to photograph a tricolor flag flying on the sunny weekend day.

The pride of being able to participate in such a civic exercise, despite being thousands of kilometers away from France, seemed palpable.

But the candidates themselves did not always arouse great enthusiasm.

Frederic Barasse, a chef in Washington who has been an expatriate for 12 years, admitted that he followed “his family’s convictions” in France rather than his own when it came time to cast his ballot.

Another Frenchman, who came with his family, said he made his decision “the moment” he voted.

In Montreal, where thousands of people had queued by the time polling stations opened at 8:00 am, Esther Sei, 26, said she had “taken the time” to educate herself on the vote.

More than 67,000 French people are registered in the French-speaking metropolis, 10,000 more than for the last presidential election.

“It is important to come… You can’t miss it. And it connects us to France,” said Francois-Xavier Ledieu, 40, an aeronautical engineer.

Voting in Montreal is taking place at the city’s cavernous Palais des Congres, in hopes voters can avoid the several-hour wait many endured five years ago.

The convention center was full to bursting, with dozens of volunteers busy organizing queues.

Some voters waited outside the huge building, which has served as a Covid-19 vaccination center.

Sarah Guerrier has lived in Montreal for 11 years.

“I have two children, who will perhaps study in France,” the tall woman, wrapped in a black jacket, said.

“So I think that for them it is important to decide who will lead France in the years to come.”