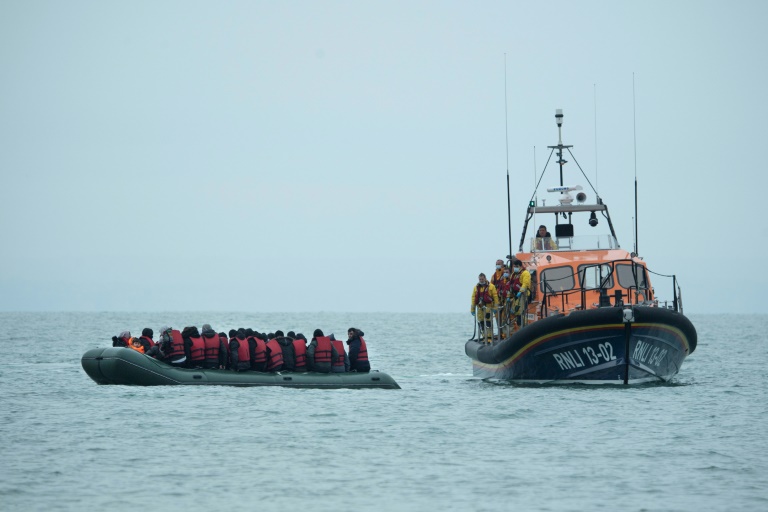 The bodies were barely out of the water after the most deadly day ever for migrants crossing the English Channel before accusations began to fly over who was to blame for the tragedy.

British Prime Minister Boris Johnson, who is desperate to see an end to migrant boats crossing from France, pointed the finger at Paris after a dinghy sank off the port of Calais on Wednesday, claiming 27 lives.

“We’ve had difficulties persuading some of our partners, particularly the French, to do things in a way that we think the situation deserves,” Johnson told reporters.

His criticism triggered a sharp rebuke from President Emmanuel Macron, who urged Johnson during a call on Wednesday evening “to refrain from exploiting a tragic situation for political ends”, according to a statement from the French presidency.

Macron stressed that France and Britain had a “shared responsibility” for the crisis that has seen 25,700 people cross the narrowest section of the Channel to Britain this year aboard inflatable boats.

“When you see what happened yesterday, you can’t play with that, you can’t exploit it,” a French presidential source said Thursday on condition of anonymity when asked about Johnson’s remarks. “You’ve got to be serious.”

Many analysts view Franco-British relations as being at their lowest point since the US-led invasion of Iraq in 2003  — which Britain supported but France opposed — complicating the response to the worsening Channel migration crisis.

“It’s extremely serious. It’s difficult to see how France and the UK can work together on issues of major importance when the relationship is so bad,” John Springford, an expert at the London-based Centre for European Reform think-tank, told AFP.

In a sign of the tensions, many British newspapers published pictures on Thursday showing a separate group of migrants, who made it safely to Britain, carrying a dinghy into the water in front of a French patrol car.

“Why didn’t France stop them?,” the front-page headline in the Metro daily asked.

The origin of the bad blood between London and Paris is Britain’s painful departure from the European Union.

The fervently pro-EU Macron took a hard line with London during the divorce negotiations, which many Brexiteers viewed as an attempt to punish Britain.

Brexit continues to bedevil relations between the neighbours, particularly over fishing rights in the Channel and trade with the UK province of Northern Ireland.

But Macron was also furious in September when Britain and the US secretly negotiated to sell nuclear submarines to Australia — at the expense of a deal for diesel-powered French submarines signed in 2016.

Johnson’s jokey response to the French anger — “Donnez-moi un break”, he said in franglais, meaning “Give me a break” — further infuriated Paris.

“There can be sense of humour differences,” a British diplomat conceded recently on condition of anonymity.

In one of many barbed French comments, Macron told the Financial Times newspaper late last month that Britain’s alleged backpedalling on its Brexit commitments was “not a big sign of your credibility”.

The two neighbours have long cooperated on trying to stop migrants crossing the Channel, which used to take place out of public view when they hid themselves in trucks or cars using  ferries or the Channel Tunnel.

The significant switch by migrants to the sea route from 2018 is partly because of France’s success in securing the port of Calais and the entry to the Channel Tunnel, where giant fences and high-tech scanners keep many intruders out.

After decades of funding new border infrastructure, Britain agreed in July to provide France with a further 62.7 million euros ($73.8 million) to stop migrant boats from setting sail, with the funds earmarked for extra beach patrols and equipment such as night-vision goggles.

But that deal too became bogged down in bickering when British Home Secretary Priti Patel attempted to link the release of the money to higher French success rates in stopping migrant departures.

In the wake of Wednesday’s disaster Britain is again pushing for joint French-British patrols along France’s coastline — something rejected in the past by Paris as an infringement of its sovereignty.

The latest flare-up risks further eroding trust and goodwill between the rivals, who spent centuries fighting each other for European dominance.

The Sun tabloid on Thursday accused French police of turning a blind eye to the migrant crisis in the Channel.

“In the Middle Ages, they used to say ‘always blame the French’,” Sylvie Bermann, a former French ambassador to London, told AFP. “It’s true that when there’s a difficulty we’re the first ones to be criticised.”

In this article:Channel crossings, Migrants