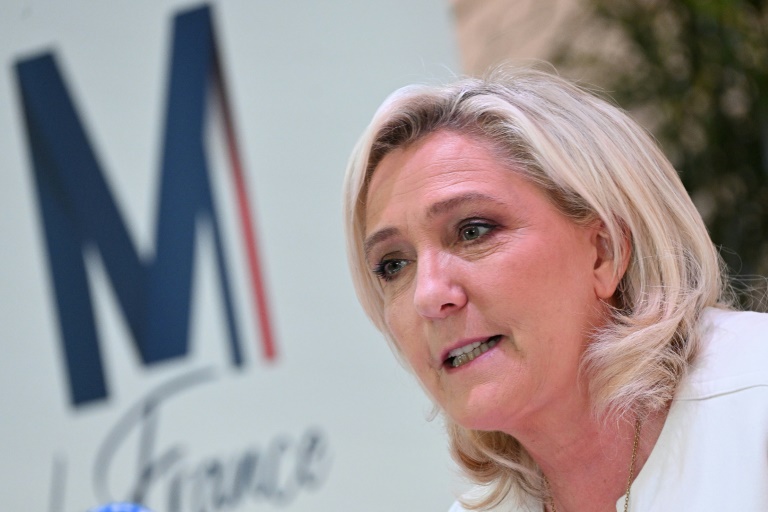 French far-right leader Marine Le Pen on Wednesday said she would back closer ties between NATO and Russia and pull Paris out of the alliance’s military command, if she defeats Emmanuel Macron for the presidency.

Le Pen faces Macron on April 24 in a run-off vote after she came second in the April 10 first round, with the latest polls showing the president holding on to a solid but slim lead.

Foreign policy is set to play an important role in the vote after Russia’s invasion of Ukraine and also accusations from Macron that Le Pen is too close to President Vladimir Putin.

The far-right leader has sought to project a more moderate image in this campaign and held a news conference on foreign policy designed to present Le Pen as a credible figure on the global stage.

But tensions were exposed when her security tackled a female protester to the floor and then roughly dragged her out of the room by the arm.

The protester had stood up and brandished a picture — cut into a heart shape —  of Le Pen meeting Putin in Russia in 2017.

Le Pen said there should be a “strategic rapprochement” between NATO and Russia once the war launched by Moscow against Ukraine had ended.

“We must ask about the role of the alliance after the end of the Warsaw Pact,” the Moscow-led military alliance that grouped Soviet bloc nations, she told journalists.

Le Pen emphasised that better ties with Russia would also prevent Moscow from becoming too close to China, noting that she was echoing an argument made by Macron in the past.

“This is in the interest of France and Europe but also I think the United States… which has no interest in seeing a close Sino-Russian relationship emerging,” Le Pen said.

She also reaffirmed her intention of repeating France’s 1966 move of leaving NATO’s integrated military command, while still adhering to its key article 5 on mutual protection.

“I would place our troops neither under an integrated NATO command nor under a future European command,” she said, adding that she refused any “subjection to an American protectorate”.

On Europe, Le Pen made clear that any “Frexit” along the lines of Britain’s exit from the European Union was not on her agenda.

But she argued that French predictions that Brexit would prove “a cataclysm for the English” had not come true.

“The British got rid of the Brussels bureaucracy, which they could never bear, to move to an ambitious project of global Britain,” she said.

But she added: “This is not our project. We want to reform the EU from the inside.”

While Macron has returned to the traditional notion of the Franco-German motor driving Europe, Le Pen also made clear she would not put relations with Berlin at the heart of her foreign policy.

“Germany is the absolute opposite of France’s strategic identity,” said Le Pen, speaking of “irreconcilable strategic differences” between Paris and Berlin.

Le Pen has been under pressure over her party taking a loan from a Russian bank but she explained this by saying it could not get the loan either in France or in Europe.

– Macron ahead, but tight –

The latest polls showed Macron slightly extending a lead over Le Pen in the second round but also giving no indication that the president is in for an easy ride.

An Elabe poll showed Macron on 53.5 percent and Le Pen on 46.5, with the president inching up 1.5 percent since its last survey.

Meanwhile, Iposos showed Macron at 55 percent with Le Pen on 45.

Macron has repeatedly warned that the election is far from in the bag and analysts have said it will be crucial to win backing from supporters of hard-left candidate Jean Luc-Melenchon who finished third and narrowly missed out on the run-off.

The president has taken a far more active role in the first three days of the final round campaign than he did for the most of the first round, where he appeared distracted by the war against Ukraine.

The opening salvoes of the campaign have been marked by bitter exchanges between the candidates, with Macron accusing Le Pen of “authoritarian tendencies” towards the media and his rival accusing the president of showing “febrility”.