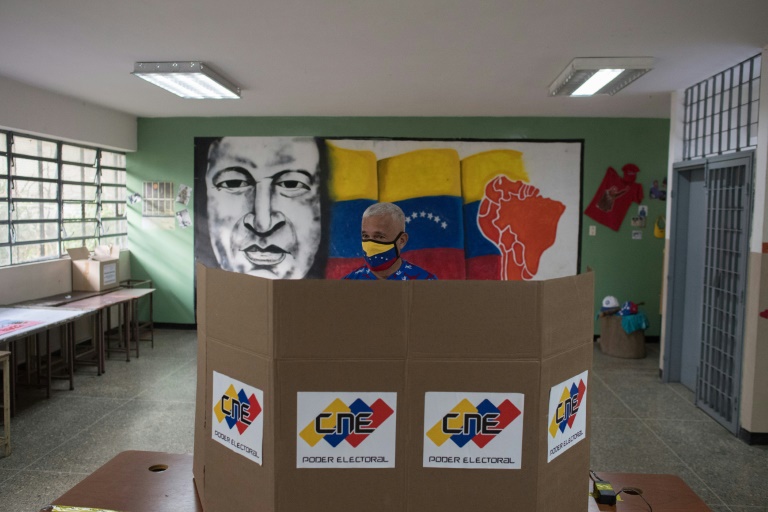 Maduro’s United Socialist Party (PSUV) took 18 of the 23 governor seats available — and looks sure to win two more — and also claimed the mayor’s office in the capital Caracas.

But the socialists were helped by the failure of opposition groups to unite around single candidates in a bid to wrest some power and control from Maduro.

“Divide and conquer… Quite a few states were lost due to division and the failure to recognize emerging leaders,” columnist and university professor Pedro Benitez told AFP.

It was the first election contested by the opposition in more than three years, having boycotted previous presidential (2018) and parliamentary (2020) votes.

But the opposition was divided into two main groups during Sunday’s vote: the Democratic Unity Roundtable (MUD) that broke 15 years of socialist hegemony by romping to victory in 2015 legislative elections, and the Democratic Alliance made up of opposition figures that did not support the 2018 and 2020 boycotts.

Even though the MUD decided to take part, not everyone was on board.

Opposition leader Juan Guaido, who rocked the political landscape in January 2019 by declaring himself acting president, with the support of around 60 countries, refused to vote, saying it would not be free or fair.

Turnout in the country of 30 million was only 41.8 percent.

The ruling party “won Caracas and 20 of 23 states with 18 percent of the electoral roll,” added Benitez.

“There was a tremendous failure by the opposition as a whole and the different opposition groups specifically because they did not manage to offer a sufficiently attractive proposal to mobilize voters,” said Daniel Varnagy, a professor in economic and social sciences at the Simon Bolivar university.

This was supposed to be an opportunity for the opposition to show it could still attract the masses, as Guaido did for six months in 2019 before his failed attempts to unseat Maduro ran out of steam and mass support.

“We need to rethink the roadmap,” said Tomas Guanipa, the unsuccessful MUD candidate for Caracas mayor, who said the main objective now was to find new leaders.

“It sounds good on paper, but how do you achieve that?” he said.

The problem within the opposition is arguments over who has the moral high ground, with accusations of selling out common, he added.

“If that doesn’t change, there’s no hope to have a strategic coordination,” said Sucre.

He said voters “did not mobilize because they felt betrayed” by the divided opposition and considered abstention a political statement to show their displeasure.

Another factor that weakened the opposition — and also their supporters’ will to vote — was the ruling party’s control over various branches of power.

The MUD, created in 2008, was banned for three years and only allowed to run again five months before the election.

In the meantime, its members operated as individual parties but authorities banned their leaders and replaced them with others, cherry-picked because they were hostile to Guaido.

That caused chaos and in-fighting amongst the opposition.

Maduro also managed to marginalize the National Assembly while it was controlled by the opposition from 2016-2020, with the Supreme Court invalidating its every decision.

In its place, Maduro created a Constituent Assembly dominated by loyalists, which was disbanded once the PSUV took back control of parliament as the opposition boycotted the 2020 legislative elections.

Another tactic saw the government create protectorates in states with an opposition governor so that it could keep most State resources in the hands of those loyal to Maduro.

“The message was clear: your vote has no use,” said Benitez. “People lost faith in the vote and the opposition didn’t help with its erratic line.”