The Department of the Interior’s Bureau of Reclamation made the announcement August 15, releasing its Colorado River Basin August 2019 24-Month Study, which sets the annual operations for Lake Mead and Lake Powell in 2020.

Lake Mead is expected to be below the level that triggers restrictions on the amount of water that can be taken from it. This comes about despite the above-average snowpack experienced in the Upper Basin this past winter. The runoff was 145 percent of average this past spring, raising Lake Powell’s elevation by more than 50 feet since early April.

This puts the total Colorado River Basin system at 55 percent of capacity, up from 49 percent at this time last year. However, critical drought contingency plans adopted by the seven Basin States, federal government and Mexico earlier this year are now in effect. 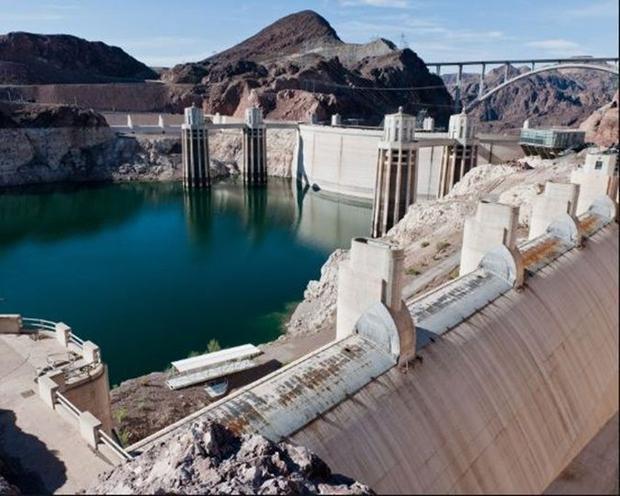 The decline in water elevation has exposed a white band of mineralized rock around the shoreline. The declining reservoir level has also exposed portions of Hoover Dam’s four intake towers, two on the right side and two on the left side. These intake towers channel water from Lake Mead into penstocks that serve Hoover Dam’s 17 hydroelectric generators.
Department of the Interior

California agreed to contribute water at a lower trigger point if the reservoir continues to fall. In a separate accord, Mexico agreed to start contributing to help prop up Lake Mead, which is now 39 percent full, reports USA Today.

On Jan. 1, 2020, Lake Mead’s level is projected to be 1,089.4 feet, the U.S. Bureau of Reclamation said late last week. That’s just below the drought contingency plan threshold of 1,090 feet. The Colorado Basin system serves about 40 million people and 6,300 square miles of farmland from Wyoming to Southern California. 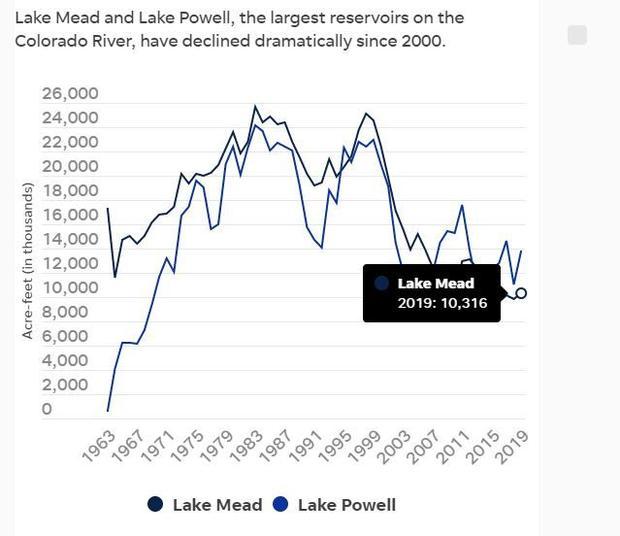 “While we appreciate this year’s above-average snowpack, one good year doesn’t mean the drought is over. We must remain vigilant,” federal Reclamation Commissioner Brenda Burman said in a statement. The Colorado River Basin continues to experience its worst 20-year drought on record, dating back to 2000. This 20-year period is also one of the driest in the 1,200-year paleo record.

The seven states should be applauded for taking the drought contingency plan seriously and preparing for Tier Zero reductions for the past five years. While reductions in water use by the states was on a voluntary basis, the only difference today is that they are required.

Sarah Porter, director of Arizona State University’s Kyl Center for Water Policy. said, “One good year isn’t enough. No matter what happens, we are as of now in a better position to deal with the future than we were before the DCP was signed.”