As of Thursday evening, over 175 structures, including homes, have been destroyed while over 50,000 additional structures are in harm’s way as the infernos continue to rage, according to Daniel Berlant, an assistant deputy director with the state Department of Forestry and Fire Protection. In all, 33 civilians and firefighters have been injured, and two people have died, reports the Associated Ptess.

Most of today’s fire activity centered in Northern Calofornia – with fires chewing through about 500 square miles of brushland, rural areas, canyon country and dense forest surrounding San Francisco, according to Market Watch. 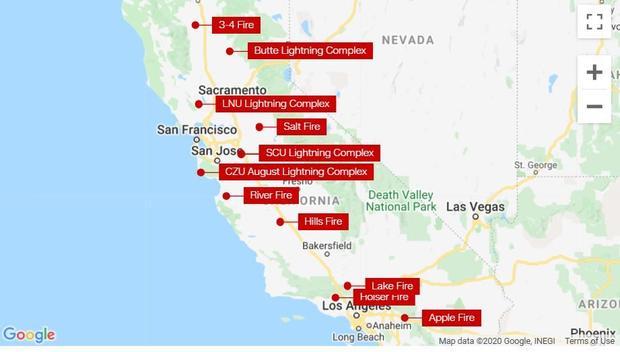 Cal Fire’s Fire Activity list as of 8 p.m. Thursday night, local time is as follows:
The River Fire, which started on August 16, in Monterey County, has burned 33,653 acres in Pine Canyon and River Rd, east of Salinas. This fire is 7 percent contained.

T944 (@GSTSSupertanker) being diverted to the #WoodwardFire @ Point Reyes in Marin Co, fire activity is also increasing there (as w/ much of the complexes). No evacuation orders + evacuation warnings remain the same per @MarinSheriff. pic.twitter.com/PlXqZ5DhJ8


The SCU Lightning Complex Fire started on August 18, is the largest, so far and takes in multiple locations in Santa Clara, Alameda, Contra Costa, San Joaquin, and Stanislaus Counties. This fire has blackened 137,475 acres and is 5 percent contained.

CZU August Lightning Complex Fire started on August 17, and also has multiple fires in various locations in the coastal mountains of Santa Cruz and San Mateo Counties. It has burned 40,000 acres and is 0 percent contained. Around 26,000 people were under orders to evacuate today.

There are a number of other fires listed, ranging in size from 15,000 acres on down to the Volcano Fire in San Diego, that started on Thursday. It has already burned 45 acres and is just 5 percent contained.


Strapped for resources
There are over 10,000 firefighters battling the blazes in the state, with some firefighters working 72-hour shifts instead of the usual 24 hours. With this being dangerous work to begin with, getting a chance to rest up is essential to their health and safety.

The state has requested 375 engines and crew from other states. “That’s going to allow our firefighters that have been on the front line since this weekend to have an opportunity to take some rest,” Berlant said.

In Marin County, just north of San Francisco, fire chief Jason Weber said that in his 25 years in in fire service, “we’ve never seen this level of draw-down” from cooperating agencies, as there is heavy competition in the western United States for equipment and people.

See what's going on in the West, here: pic.twitter.com/hy9kYrTpGE


Fire officials are also dealing with the few people that refuse to leave when ordered to evacuate, Cal Fire Chief Mark Brunton said. “With the resources that we are lacking, we ask you to help us to help us to do our jobs and to keep the public safe,” he said.

Kevin Stover, 42, was struggling with indecision early Thursday when a mandatory evacuation order was issued for the rugged and small town of Felton outside the beach city of Santa Cruz.

“I don’t want to leave,” said Stover, a camera operator and rigger now driving for Door Dash and Lyft because of the pandemic. His car, loaded with important papers, his father’s urn and some arrowheads that meant a lot to him, had a flat tire. “I’m trying to figure out if I should cut these original oil paintings out of the frame to salvage them,” he said.