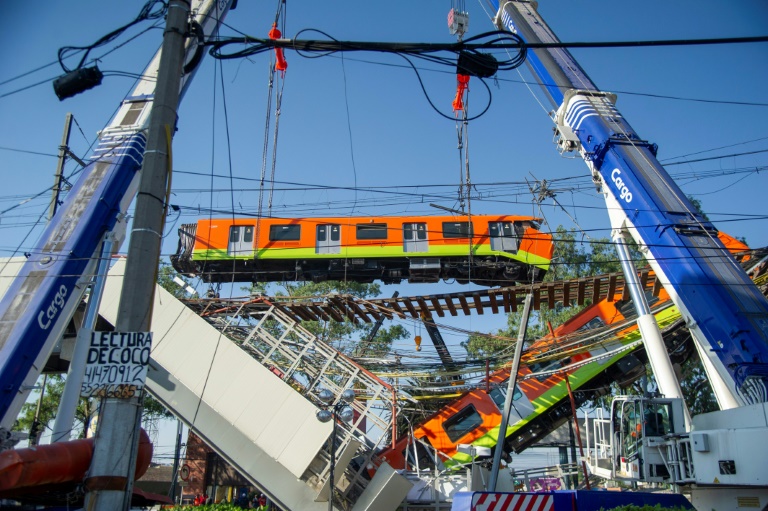 Commuters riding Mexico City’s metro just a day after one of its worst ever accidents said they worried for their safety but had little choice other than to use the network.

“We were already afraid when traveling, but now even more so,” said 30-year-old Brenda Gonzalez.

“They say they do maintenance, but it doesn’t seems like it to me. They steal the five pesos ($0.24) that we pay” per trip, she added indignantly at the Candelaria station near the historic district.

The shoe factory worker said she was shocked by the images of rescuers trying to free people from the train carriages left hanging from an overpass on Monday night.

“Everything happens to this metro, but there’s no other choice,” she said.

Line 12 of the metro where the accident struck had already suffered problems in the design, operation and maintenance of the tracks, according to a 2014 study commissioned by the city mayor’s office.

The wider network has also been plagued by safety issues.

In March 2020, two subway trains collided in Mexico City, leaving one dead and around 40 injured as panicked passengers fled through thick smoke.

In January of this year, one person died and 29 suffered smoke inhalation injuries in a fire in the metro’s control center.

Standing next to a window of a carriage on Line 4, which is also elevated in some sections, 42-year-old security guard Fernando Dominguez said he too feared an accident.

“I’ve used this same line to go to work for more than 10 years and I’ve never seen anyone doing maintenance on anything,” he said.

“And right in this section everything shakes as if it’s going to fall,” he added, sweating forming on his brow.

The other passengers on the same metro train with Fernando were silent and exchanged nervous glances when the train braked gently.

“It’s one thing taking the metro down below, but when it comes up here after what happened yesterday it scares you more,” said Agustin Suarez, a 70-year-old retired accountant.

Almost 80 people were hospitalized after Monday’s accident, including 28-year-old Daniel Hernandez, who was admitted to the Belisario Dominguez Hospital in the east of the city near the scene of the disaster.

“He’s in a very delicate condition. They operated on him at night,” said his uncle, Jorge Hernandez.

“The blood went to his lungs — that’s what they told my sister,” he said.

His nephew was transferred by helicopter to another hospital and the family was waiting for more information about his condition, the uncle said.

At the Tlahuac General Hospital, a couple was looking for their neighbor who was feared to have been crushed in his car when the concrete columns collapsed.

“We don’t know if he’s dead or alive. His stepfather told us that he had already died, but a reporter filmed a video where he is trapped and asks for help,” Jose Luis Vigil told AFP.

“The car is still under the column. We know that she (the wife) is alive,” he added.

The metro is the main means of public transport in Mexico City and the surrounding suburbs — home to 20 million people —  and complaints about its lack of maintenance have been common among users for years.