Euroelectric, the association of the electricity industry in Europe, represents 3,500 utilities with a combined value of over $200 billion. Every EU nation with the exception of Greece and Poland signed on to the pact that will help to achieve Europe’s clean energy future, according to The Guardian.

“26 of 28 member states have stated that they will not invest in new coal plants after 2020,” said Kristian Ruby, Eurelectric’s secretary-general. “History will judge this message we are bringing here today. It is a clear message that speaks for itself, and should be seen in close relation to the Paris agreement and our commitment to provide 100 percent carbon-neutral electricity by 2050.”

Of historical significance to the announcement, the news was announced 442 years after the continent’s first pit was sunk by Sir George Bruce of Carnock, in Scotland, according to Ian Brown’s The Edinburgh History of Scottish Literature.

Euroelectric released another statement on Wednesday, according to CNBC, saying the European electricity sector firmly believed that achieving decarbonization objectives set out in the landmark Paris climate agreement was “essential to guarantee the long-term sustainability of the global economy.” 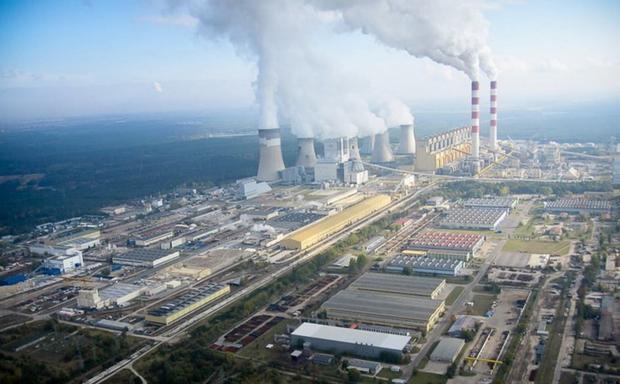 Bełchatów Power Station is a lignite-fired power station that produces 27-28 TWh of electricity per year, or 20 percent of the total power generation in Poland.
Morgre / Wikipedia (CC BY-SA 3.0)

The initiative was originally met with resistance by Germany, which is still dependent on nuclear energy while it transitions to clean energy sources. However, in the end, Poland, which depends on coal for 90 percent of its electricity and Greece, which has plans for new coal-fired plants already in the works, were the only two countries to not sign off on the initiative, reports the Climate Action Programme.

The year 2016 saw a sharp decline in the number of coal-fired power plants under pre-construction around the world, according to the Boom and Bust 2017 report. The report shows there was a 48 percent decline in planned coal-fired stations and a 62 percent drop in construction starts.

In Europe and the United States, the past two years have seen a number of coal-fired plants taken out of commission with about 120 large facilities being retired.

David Jones, an Electricity Analyst at Sandbag, said in a statement: “It is clear that phasing out coal in favor of renewables is the quickest and cheapest way to rapidly reduce ETS emissions, and policymakers must figure out how to make this happen.”