After he was asked by the interviewer about a surveillance videotape allegedly in the possession of law enforcement, Patrick answered that although he had not seen it, he had been told by law enforcement briefers what it contained: the “clear” sequence that Tsarnaev had taken off his backpack, put it down on the sidewalk, and walked away.

“Is there anything on the videotape that maybe the public hasn’t seen, about his reaction that is particularly telling, that will move the investigation along?”

“The videotape is not something I’ve seen, it’s been described to me, in my briefings, but It does seem to be pretty clear that this suspect took the backpack off, put it down, did not react when the first explosion went off and then moved away from the backpack in time for the second explosion. It’s pretty clear about his involvement and pretty chilling, frankly, as it was described to me.”

Therein lies the entire case against Tsarnaev, against whom, despite endless anomalies, photographs, inexplicable contradictions, and astonishing coincidences, there is no solid evidence. A competent prosecution could present the case in one day, and let the traumatized families go home.

Show the full video segment of Tsarnaev putting the backpack down, not reacting to the first explosion, then walking away before the second one. Case closed.

If the prosecution does not show that tape, it means it does not have it, and never did, and that the FBI put a US governor up on national television to lie for its purposes before the entire country.

Sure, there is the writing in the boat that Dzhokhar climbed out of, amazingly, not reported until a full month after the bombing. But if Dzhokhar was so willing to take credit for the attack, and send the message that it was revenge for Afghanistan and Iraq, why did he plead “not guilty” at his hospital bedside arraignment? As the authorities continued to release photographs seemingly designed to incriminate Tsarnaev, even after the suspect was captured, why would it sit on this bombshell of a written confession for a month? In light of this, skeptics may be forgiven if they say they think corrupt elements within the authorities had written the message themselves, after the fact.

Then there is the mystery witness, “Danny,” who is anonymous to this day, who is the only link between the Tsarnaevs and the killing of MIT officer Sean Collier. Recall Danny is the allegedly carjacked Chinese entrepreneur, who played a part in the killing and capture of the brothers. Behind a screen of anonymity, on CNN one night, Danny alleged that Tamerlan Tsarnaev confessed to the Boston bombing, and said “I just killed a policeman in Cambridge.” But there are problems with Danny’s story.

For one, he told WMUR News that he made his escape at a gas station when both brothers were outside the car, while Dzhokhar was inside paying and Tamerlan was pumping gas. He told WMUR:

“I thought it was a very good chance for me to run. So, I made a judgment. I used my left hand to unbuckle my belt, my right hand to open the door. I jumped out of the car and ran away across the street.”

“The guy outside the car [Tamerlan] tried to catch me using his hand,”

On the other hand, Danny told John Miller of CBS News that when he escaped the carjack, Tamerlan was not pumping gas, but still in the car. CBS reported:

“at a gas station Dzhokhar left the car to pay inside. Tamerlan was fiddling with the GPS. Danny knew this might be his last chance. “I was counting,” Danny said. “I was counting. I was just, ‘one two, three, four.’ And I just do it. And I did it. I can feel Tamerlan trying to grab me…”

These are only some of dozens of questions hanging in the air, not all of them to be answered by Tsarnaev. The Dzhokhar Tsarnaev trial is one trial were the FBI has almost as much ‘splaining to do as the suspect.

The FBI was caught, despite initial denials, having to admit that they knew the Tsarnaev brothers quite well, long before the explosions, having interviewed them and had “multiple contacts, according to North Carolina Senator Richard Burr, member of the members of the Senate Intelligence Committee.

Then, despite the small Boston FBI counter-terror unit undoubtedly knowing who the men were in the surveillance photos which showed them standing near the finish line, Boston FBI chief Richard Deslauriers went before the media, four days after the bombing, to ask the public’s help in identifying them from the pictures, even though the FBI knew full well who they were.

Then Tamerlan Tsarnaev’s friend in Florida, Ibragim Todashev, who might know something about Tamerlan’s contacts with the FBI, winds up dead of three bullet entrance wounds to the back and one to the top of the head, which the FBI tries to explain by describing a charge that must have looked like a flying back-first partial somersault by the unarmed man, into a drawn FBI gun. Skeptics of the FBI’s case against the brothers point to this one impossibility in the FBI’s overarching narrative to suggest that the FBI was acting criminally in this case, and for some reason wanted Todashev, one of Tamerlan’s few close friends, dead.

Yes, there is the testimony of Jeff Bauman, the wounded survivor who said that Tamerlan looked him in the eye and walked away before one of the bombs blew off his legs, which is direct eyewitness testimony. But Tamerlan is dead, and not the one on trial. Dzhokhar is. And as the younger brother, Dzhokhar’s relationship with his, according to those who knew him, charismatic and overbearing brother is one of the issues at hand.

The questions go on. How did Dzhokhar come out of the boat with no neck wound and then suddenly wind up in critical condition with a grievous neck wound? Why did the legion of law enforcement officers obviously have orders to kill Dzhokhar, as evidenced by the footage captured by a Watertown resident showing the police lighting up the boat?

There was no way Dzhokhar was supposed to climb out of that alive.

Dzhokhar emerging from hide-out, with wound on right neck 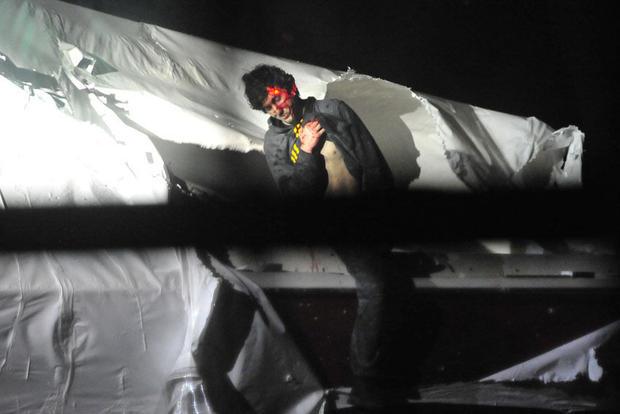 And little things. Rather than lock down an entire city for more than a day, to hunt for Dzhokhar, who had escaped probably bleeding and on foot, why not just call out the bloodhounds? There is no way you can beat a bloodhound, and Tsarnaev had a fresh, bleeding scent. He was found fairly near to where he fled the car.

And then there is the capture of the shootout footage in which the brothers are apparently trying surrender, yelling “Chill out!” and police fire and yelling “We didn’t do it!”

So many questions. Will the prosecution just cut straight to the chase and save us all a little time? Produce the video surveillance tape showing Dzhokhar clearly putting the backpack down, as Governor Patrick said, and not reacting to the first explosion. Produce “Danny.”

Either they have the tape or they don’t.

Acclaimed actress Katey Sagal is killing it each week on the hit TV series "Rebel" on ABC. Digital Journal has the scoop.

Ellen DeGeneres, a staple of daytime American talk show culture, said Wednesday she is ending her show after 19 seasons.