At least 62 people have died and over 700,000 have been left homeless in Peru due to torrential rains caused by a localized abrupt warming of ocean waters in the Pacific.

Peru’s rainy season has seen 10 times more rainfall than usual, with downpours causing landslides and raging rivers sweeping away people, clogging highways and destroying crops, according to Reuters. The scale of the destruction prompted more than half the country to declare a state of emergency. 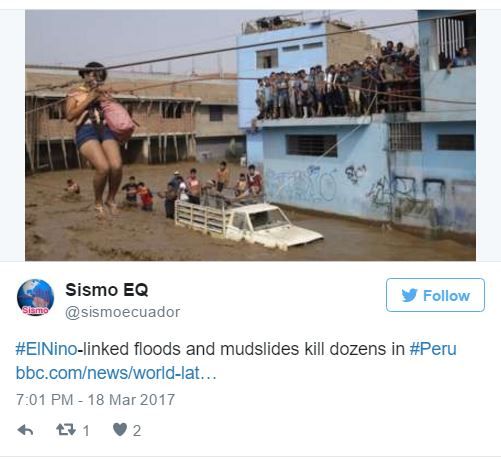 Twitter/#elnino
Over 100,000 homes have been destroyed and 100 bridge have been swept away or collapsed. In Lima, Peru’s capital, running water has been restricted because the treatment systems have been compromised due to flooding. Prime Minister Fernando Zavala said that the hardest hit areas were in the northern part of the country where rainfall amounts have broken records.

And while heavy rainfall has eased, the country is in for at least another month of torrential downpours as the local El Nino phenomenon will likely continue along Peru’s northern coast at least through April, said Dimitri Gutierrez, a scientist with Peru’s El Nino committee.

Food shortages and rising prices for bottled water
The poor have been particularly hard hit, with whole areas of slums being totally washed away by the torrential rains, leaving thousands of people without any shelter from the storms. Additionally, the country is facing a severe shortage of foods because of the destruction of crops in the fields, reports Euronews.

The government says the price of bottled water and other food items has increased an average five percent over the last week. “We need water. We don’t have water to give babies a bath. We are here, we are stuck here with nothing. No home. We’ve been ruined,’‘ one woman said. 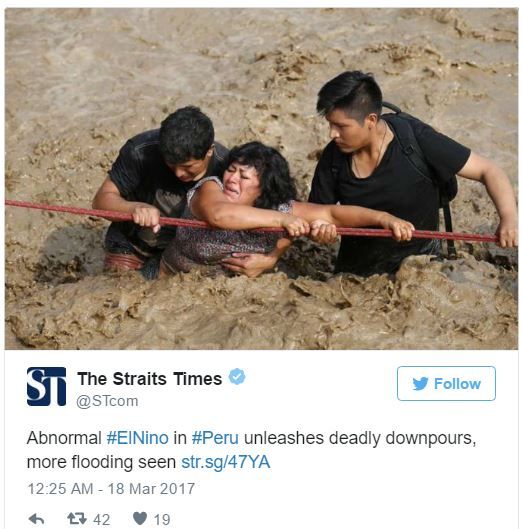 Twitter/#elnino
Jorge Chavez, a general tasked with coordinating the government’s response, said that Peru is going to have to rethink its infrastructure plans in preparation for the “tropicalization” of its northern desert coast, which many climate models are forecasting as the climate continues to warm.

We need more and better bridges, we need highways and cities with drainage systems,” said Chavez. “We can’t count on nature being predictable.”

Could leftover heat from the last El Nino fuel a new one?
Actually, the most recent El Nino that ended in the spring of 2016 left behind enough warm water to fuel the birth of another El Nino. Climatologist Bill Patzert of NASA’s Jet Propulsion Laboratory, Pasadena, California, says that right now, the Pacific Ocean is in a La Nada or neutral state. 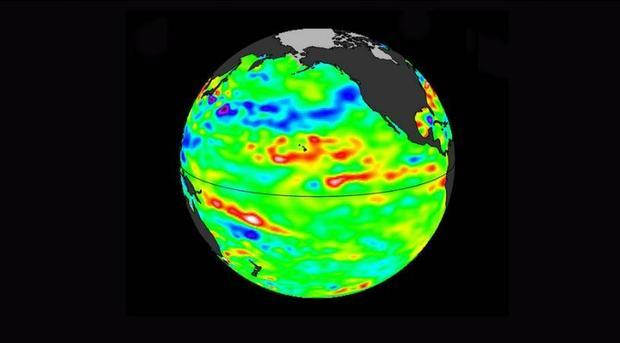 Data collected Feb. 28 – March 12, 2017, by the U.S./European Jason-3 satellite show near-normal ocean surface heights in green, warmer areas in red and colder areas in blue. Ocean surface height is related in part to its temperature, and thus is an indicator of how much heat is stored in the upper ocean.
NASA
NASA points out that the last El Nino was unusual because its warmer than average water reached deep into the ocean’s water column, but it spread its warm water farther than usual, with warmer-than-average water reaching Hawaii and even the West Coast of the mainland U.S.

Those pockets or bulges of warm water have lingered into the 2017 winter, even though waters along the equator have cooled. The sub-tropical warmth may have limited the strength and areal extent of the recent La Niña and may speed up the return to El Niño. Patzert says, “A warmer or cooler Pacific Ocean will certainly play a big role in future El Niño and La Niña events.”