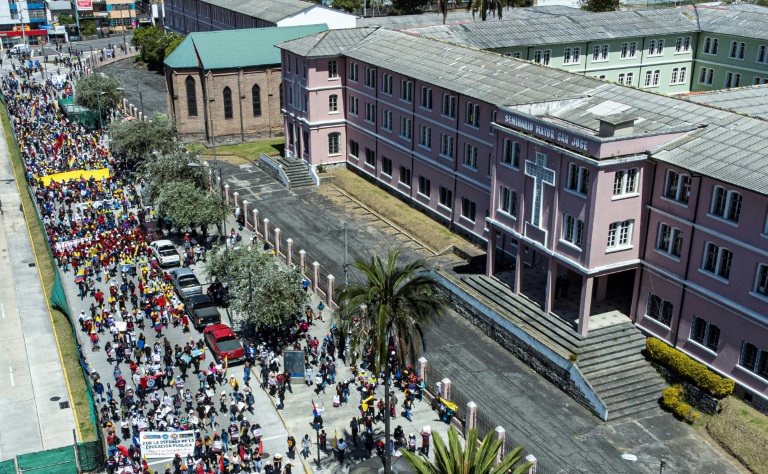 Talks between Ecuador’s government and Indigenous leaders resumed Thursday, after an acrimonious suspension, to seek an end to cost-of-living protests that have largely paralyzed the country since June 13.

Negotiations resumed in the capital Quito at a church, which is mediating, with early indications of a possible breakthrough.

Church official Alfredo Espinoza said the mediators had proposed an extra five-cent-per-gallon reduction in the price of diesel and gasoline, on top of the 10-cent cut already implemented in response to the protesters’ complaints about fast-rising fuel prices.

Protesters had wanted a 40-cent cut.

Both parties had provisionally agreed to the proposal, said Espinoza, but a deal has yet to be signed.

The Indigenous delegation retired to consider its next move as thousands of supporters gathered outside the meeting venue.

An estimated 14,000 Ecuadorans — most of them in Quito — have taken part in a nationwide show of discontent against deepening hardship in an economy dealt a serious blow by the coronavirus pandemic

The protests were called by the powerful Confederation of Indigenous Nationalities of Ecuador (Conaie), which is credited with unseating three presidents between 1997 and 2005.

Indigenous people make up more than a million of the South American nation’s 17.7 million inhabitants.

Talks between the two parties started on Monday but were cut short the following day after the killing of a soldier the government blamed on protesters.

On Wednesday, the government said it would re-enter the talks, but also imposed a fresh state of emergency in four of the country’s 24 provinces as violence continued to mar the country-wide uprising.

Besides the soldier, five demonstrators have died and hundreds on both sides have been wounded in clashes between the security forces and protesters who have blockaded roads and disrupted supply lines.

Some 150 people have been arrested, according to observers.

The action has been costly, with losses of some $50 million per day to the economy, according to the government, which has warned oil production  — already halved — could come to a complete halt soon.