The video of the event was released last Wednesday by the government of the NWT, showing how the lake collapsed into a valley below, creating a large waterfall that lasted two hours, and an oozing river of mud and debris.

“It drained quickly,” said Steve Kokelj of the N.W.T. Geological Survey, according to the Canadian Press. “It was one of those things that you can get out of the way of but you can’t stop,” he added. 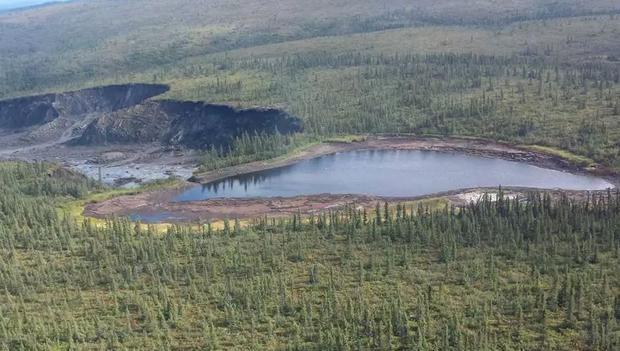 File photo: A lake, which has no name and sits in the Northwest Territory’s northern corner near the community of Fort McPherson, is a victim of the region’s geology and changing climate. In a dramatic example of how climate change is altering the Arctic landscape, the small northern lake has fallen off a cliff after bursting through the melting earthen rampart that restrained it. Date: Dec. 21, 2015.
Handout / Government of Northwest Territories

The unnamed lake is located in the northwestern region of the NWT, about 20 km northwest of Ft. McPherson, in what is known as the Peel Plateau. The permafrost in this region has a high percentage of ice in its headwalls, sometimes building up to 30 meters thick. This ice has been there since the last ice age.

Slumping occurs when ice-rich permafrost melts, causing the ground to collapse and a Crater-like scar to form. These headwalls of thawing ice eat away at the slope, forming a muddy, oozing slurry that can accumulate and then flow downstream at sometimes incredible rates of speed. While thaw slumps have been occurring for centuries, it was only recently that they have increased dramatically, and they have become important geohazards.

This is basically what happened on July 15, The exposed headwall, weakened by winds and rains, thaws, causing the rocks and soil on top to collapse. When this happens over and over, something eventually has to give, and on July 15, the narrow strip of land holding back the lake gave way, reports Newser.

About 30,000 Cu. meters of water, or about 12 Olympic-sized swimming pools poured through the break in the wall, forming a waterfall that lasted two hours. A slurry of mud and debris continued to flow a kilometer down the valley for two days, moving at 50 meters per hour.

Kokelj says the slumps are getting bigger as temperatures warm and rainfall increases. He also estimates that the amount of land affected by slump thaws has almost doubled in the last 30 to 40 years. The slump that finally collapsed in July had been deteriorating for almost a decade.

Interestingly, not all the water drained from the lake, but there is a very good explanation for this. Still unfrozen sediments under the lake held the remaining water back, giving the banks some stability. But the process of slumping is far from over and it is just a matter of time before the rest of the lake collapses.