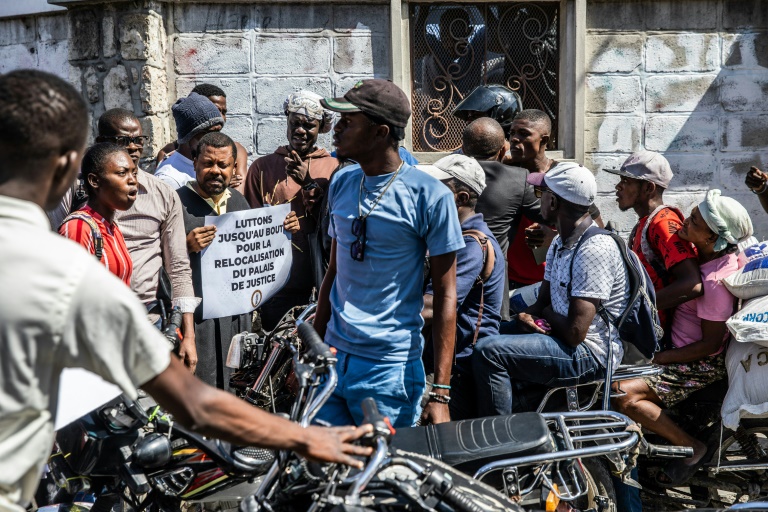 Jackson held out for more than a week as gunfire ripped through his poor neighborhood in the Haitian capital, hoping help would come to end the bloody turf war between rival gangs.

“For eight days, the bursts of bullets flew non-stop but we thought that the police were going to intervene,” he said.

But the police never showed. So like thousands of others, 29-year-old Jackson — taking nothing but the clothes he was wearing — fled his home.

The United Nations said Friday that clashes between rival gangs in the downtrodden slums of northern Port-au-Prince have claimed the lives of at least 75 people, including women and children, since all-out war started on April 24.

The world body said it was “deeply concerned by the rapid deterioration of the security situation” in the city.

“According to multiple sources, at least 75 people, including women and children, have been killed and 68 others injured,” the UN statement said.

It added that at least 9,000 residents of the conflict-hit northern suburbs have been forced to flee their homes and take refuge with relatives or in temporary shelters such as churches and schools.

Jackson held out until last Sunday. He was just returning from church when the fighting came right to his door.

“I didn’t know that the members of the ‘400 mawozo’ gang had managed to cross the bridge” next to his home, Jackson said, referring to the most feared of all the gangs.

“Suddenly I heard neighbors yelling ‘They’re at Shada crossroads’, which meant they were 30, 40 meters from me. I had my identity card, my driver’s license and my insurance card on me. I took my passport and ran out,” he said.

As he passed a nearby gas station, he saw gang members accusing the motorcycle taxi drivers who were parked there of being lookouts for a rival gang. “So they shot them,” Jackson said.

For decades, armed gangs have run amok in the poorest neighborhoods of Port-au-Prince, but they have drastically increased their hold across the Haitian capital and the country at-large in recent years, sending murders and kidnappings skyrocketing.

The UN has denounced the “extreme violence” of the gangs, saying local sources recorded “acts of sexual violence, including the gang rape of children as young as 10 years, and the terrorization and intimidation of the local populations living in areas controlled by rival gangs.”

The UN children’s agency, UNICEF, has warned of the gangs’ impact on children’s education.

“In Haiti, 500,000 children have lost access to education due to gang-related violence,” it said on Friday. “Nearly 1,700 schools are currently closed in the metropolitan area of Port-au-Prince.”

“No child can go to school while bullets are flying in the air, it’s dangerous and it shouldn’t be like this,” said Bruno Maes, the UNICEF representative to Haiti.

The UN office in Haiti has also expressed concern over children being recruited into the armed gangs.

The Haitian government has not yet commented on the latest outbreak of violence which has placed the capital in a state of siege, preventing any safe exit by road to the rest of the country.

Last October, the powerful “400 Mawozo” gang abducted a group of 17 North American missionaries and their relatives, including five children.

The district where the violence has been centered is highly strategic: it contains the only road access to the country’s north as well as between Haiti’s capital and the Dominican Republic.

Since June, authorities have also lost control of the only road connecting Port-au-Prince to the south. For a stretch of two kilometers (1.2 miles), the highway is completely under the control of armed criminals from the slums of Martissant.

Gangs in Martissant have also forced Doctors Without Borders, an international medical nonprofit, to close a hospital it had been running there for 15 years.

In this article:Children, Education, Gangs, Haiti