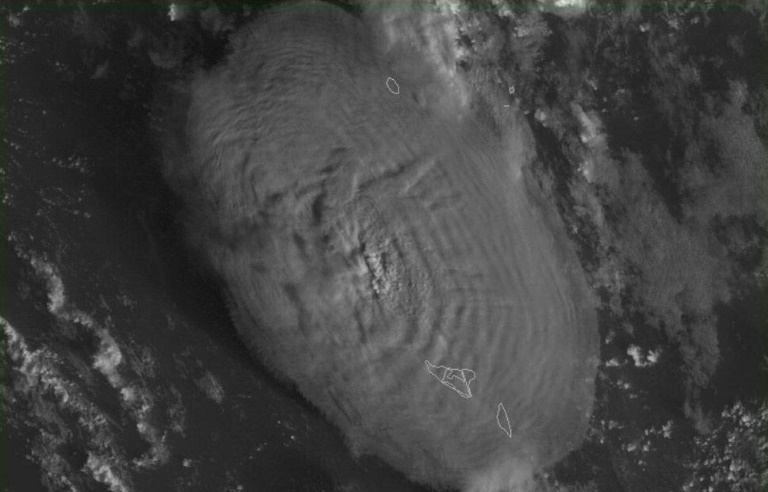 A distress signal has been detected in a low-lying Tongan island following the volcanic eruption and tsunami, the United Nations said Tuesday as the first death was reported.

The UN Office for the Coordination of Humanitarian Affairs expressed concern for two islands, Mango and Fonoi, after surveillance flights confirmed “substantial property damage” from Saturday’s eruption but there had been no contact with residents.

“An active distress beacon had been detected from Mango,” the OCHA said. The island is home to more than 30 people, according to Tongan census figures.

The agency said extensive damage had been reported on the western beaches of Tonga’s main island, Tongatapu, with several resorts and houses either destroyed or seriously damaged and two people were missing.

No details of the missing were released but the brother of a British woman who was swept away by the tsunami said his sister’s body had been found.

Nick Eleini said the family was “devastated” that Angela Glover had died wile trying to rescue her dogs.

“Earlier today my family was sadly informed that the body of my sister Angela has been found,” Eleini said in a statement.

Angela Glover, 50, and her husband lived in Tonga were she ran an animal welfare charity providing shelter and rehoming stray dogs.

“I understand that this terrible accident came about as they tried to rescue their dogs,” Eleini said.

Three days after the eruption, information coming out of the Pacific archipelago is scarce with most communication links severed.

New Zealand MP Jenny Salesa, whose electorate has a large number of Tongan residents, said everyone was praying for the people of Tonga.

The New Zealand and Australian air forces conducted surveillance flights over Tonga on Monday and were preparing further flights to carry emergency supplies to the Pacific kingdom.

The OCHA said that while communication issues meant they could not fully assess the impact of the eruption and tsunami, there was concern about the contamination of drinking water and crops, and the need for safe water supplies.

In this article:tonga, volcanic eruption, Volcano