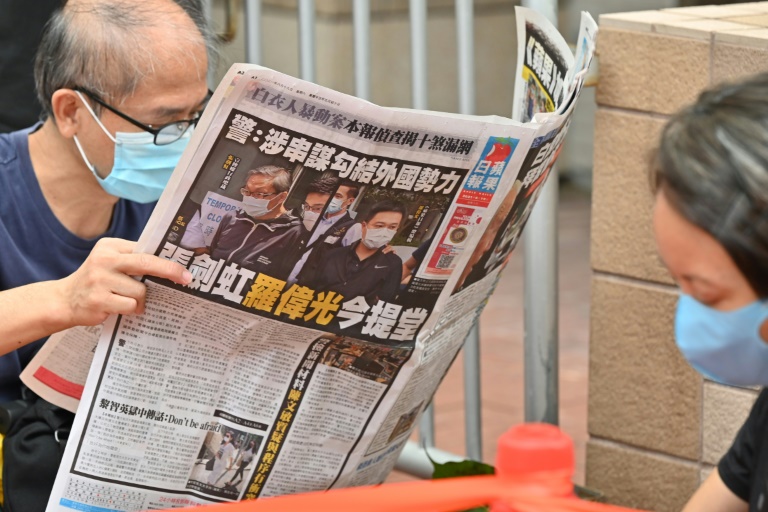 Over the last week, Apple Daily’s journalism was declared a threat to China’s national security by Hong Kong authorities and the paper saw its assets frozen — a move that crippled its ability to operate.

Thursday’s edition will be its last, bringing the curtain down on Hong Kong’s most outspoken tabloid.

Caustic criticism of Beijing was baked into the paper’s DNA.

It was founded in 1995 by Jimmy Lai, a billionaire mogul who had fled to the city from the mainland as a penniless child and amassed a fortune selling clothes.

Lai had not been especially political until the events of June 4, 1989, when he and many other Hong Kongers watched China send tanks to crush democracy protesters in Beijing’s Tiananmen Square.

So Lai sold up and ploughed the proceeds into a new endeavour — founding a media empire.

Much like Rupert Murdoch, Lai carved a space out in Hong Kong’s crowded media landscape by being brasher and louder than his rivals, combining often populist right-wing politics with ample lashings of sex, celebrity and scandal.

He also launched a brutal price war and the tactics paid off. In just a few years Apple Daily was printing 400,000 copies a day. Lai also opened up a Taiwan edition.

Much like other print media, its circulation crumbled in recent years — to around 80,000 daily copies for Hong Kong — and Lai had to write cheques to keep the paper afloat.

But it remained an especially loud voice of defiance as local media increasingly began to self-censor and avoid taking on China’s leaders directly.

As Hong Kong’s pro-democracy movement gathered steam from 2014 onwards, Lai became public enemy number one to Beijing, with state media routinely describing him as a “traitor” and a “black hand”.

Apple Daily’s support for the huge and often violent democracy protests that rocked Hong Kong in 2019 infuriated Beijing further, as did Lai campaigning for international sanctions and being an avid Donald Trump supporter.

Lai, 73, was among the first high-profile democracy activists charged under the law.

Authorities say their prosecution is based around articles Apple Daily published that supported international sanctions against China, a view now deemed illegal under the security law.

The paper’s sudden demise is a stark warning to all media outlets on the reach of a new national security law.

Many news teams in the city specialise in reporting on China and outlets are now questioning whether they have a future there.

Hong Kong has steadily plunged down an annual press freedom ranking by Reporters Without Borders, from 18th place in 2002 to 80th this year. Mainland China languishes 177th out of 180, above only Turkmenistan, North Korea and Eritrea.

The New York Times moved its Asia hub last year to South Korea after the law was enacted, and others have drawn up contingency plans.

Hong Kong’s local media has gradually shifted since the 1997 handover.

It remains far freer and more vibrant than the mainland, where all media is state controlled.

But reporter associations say they increasingly have to self-censor, fearful of incurring Beijing’s wrath or sparking advertising boycotts by mainland companies.

Apple Daily was something of an outlier in that regard, refusing to be cowed and remaining vociferously polarising.

The two most aggressive tabloids left on the scene — Wen Wei Po and Ta Kung Pao — answer to Beijing’s Liaison Office and are staunchly pro-government.

In an interview with AFP almost exactly a year ago, shortly before the law came into force, Lai predicted it would be used to silence his newspaper.

“Whatever we write, whatever we say, can be subversion, can be sedition,” he said.

He brushed off the threat of prison.

“I’m a troublemaker. I came here with nothing, the freedom of this place has given me everything. Maybe it’s time I paid back for that freedom by fighting for it.”