Queensland University of Technology researcher Matthew Dunbabin told the BBC that field trials are being performed in Moreton Bay in Brisbane to tweak the navigation system on the Cotsbot robot.

The Cotsbot was designed by researchers to specifically eradicate the crown-of-thorns starfish, described as a significant threat to corals. After it has finished its job in a particular area, divers will move it to another site and clean up any survivors.

According to research by the Australian Institute of Marine Science, coral cover on surveyed reefs has declined by over 50 percent in the past 30 years, with COTS being responsible for at least half of the decline. Outbreaks of COTS occur about every 17 years, and there have been four documented outbreaks since the 1960s, with the last one in 2010.

Cotsbot will use vision technology
Dunbabin explained how the Cotsbot will visualize the offending starfish: “This system has been trained to recognize [crown-of-thorns starfish] from among a vast range of corals using thousands of still images of the reef and videos taken by COTS-eradicating divers.”

Once the COTS is identified, the Cotsbot moves in and injects a deadly chemical into the starfish. “Over the next five months we plan to progressively increase the level of autonomy the robot is allowed, leading to autonomous detection and injection of the starfish,” Dunbabin says. 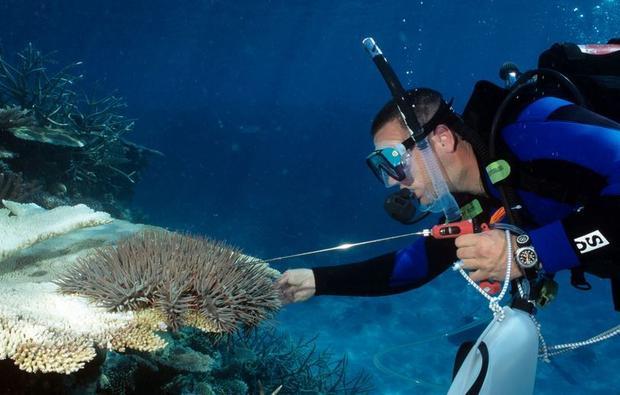 Killing COTS has been done by a single injection using divers. The COTSbot will take over this job.
Great Barrier Reef Marine Park Authority

The crown-of-thorns sea star
The crown-of-thorns starfish, Acanthaster planci, is huge. It is a multi-armed sea star that usually preys on hard or stony coral polyps. It gets its name from the poisonous thorn-like spines covering its upper surface. Suffice to say, it is one of the largest sea stars in the world.

Spikes in the number of COTS are seen during Australia’s wet season when floods of additional nutrients and sediments rush into the Great Barrier Reef. This action promotes plankton blooms, increasing food for many marine creatures, including COTS larvae.

Timing of plankton blooms is very critical, because if the blooms occur during the months of October through February, during the COTS spawning season, the potential for an outbreak increases. It is thought that nutrient enrichment may not be totally responsible for the COTS outbreaks. 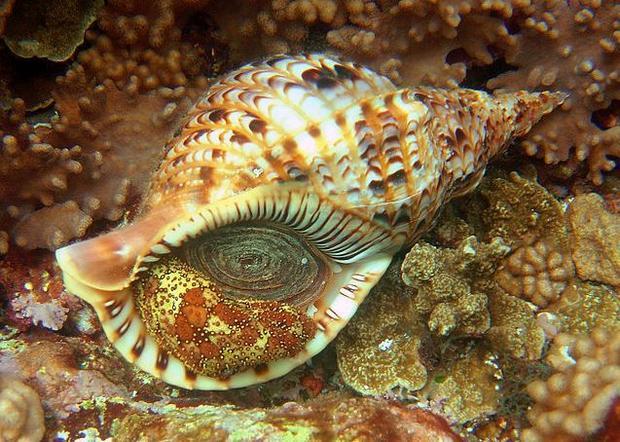 The giant triton snail, Charonia tritonis, is one of the main predators of the COTS.
David Burdick, NOAA

Another notion suggests that a reduction in natural predators may be having some influence. It is thought that shell collecting and fishing has led to the decline in predator numbers. The giant triton snail, humphead Maori wrasse, sweetlip emperor and starry puffer fish all are known to feed on COTS.