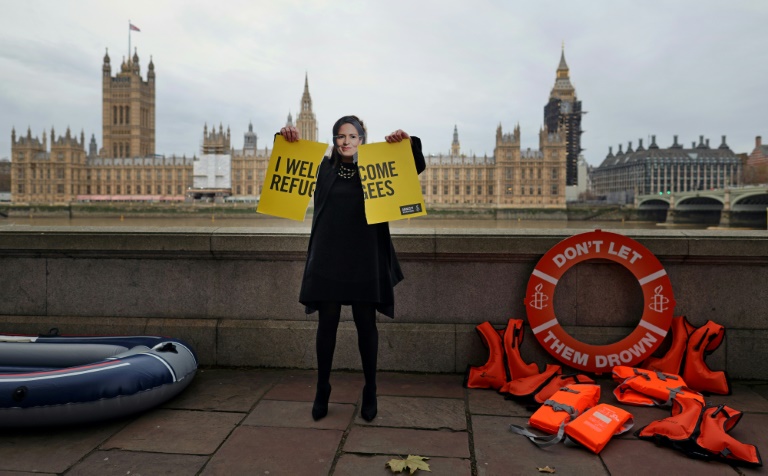 Britain on Thursday hailed what it said was a “world-leading” reform of its asylum system, despite widespread condemnation and claims that it breaks international law.

Home Secretary Priti Patel called the passing of the controversial Nationality and Borders Act a “landmark” that created changes fit for the 21st century.

But it also imposes tougher jail terms for anyone arriving illegally in the country, which has raised fears it could be used against asylum-seekers.

The act provides greater powers to speed up the removal of failed asylum claimants and “dangerous foreign criminals”, as well as stops what Patel called “meritless” legal challenges to prevent deportation.

Immediate entry has been made tougher for arrivals who have travelled to Britain through a safe country before making their claim.

“The UK has a proud record of resettling those who are most vulnerable and we will now be able to strengthen our safe and legal routes for those most in need of resettlement,” said Patel in a video statement.

“These measures in this new law are what the British people have asked for: a fair but firm asylum system fit for the 21st century.”

Prime Minister Boris Johnson made “taking back control” of Britain’s borders a key plank of his successful campaign to leave the European Union.

But Patel — whose own parents fled Idi Amin’s Uganda — and the government have found implementing that pledge more problematic.

Last year, record numbers of migrants crossed the Channel from northern France, ratcheting up political pressure on ministers to act.

Earlier this month, the government signed a deal to send migrants who have arrived by the risky sea route since January 1 for resettlement in Rwanda.

Human rights groups and charities supporting refugees and migrants slammed the plan, and some organisations are threatening to take the government to court.

UN refugees chief Filippo Grandi said the new laws could break both the letter and spirit of global refugee conventions to which Britain is a signatory.

He said he was disappointed the country was looking to shut its doors to asylum-seekers and give refugees a lesser status, with the constant threat of removal.

“Wide-ranging inadmissibility rules have the potential to deny refugees their right to seek asylum in the UK,” he added.

“Such provisions are potentially at variance with the Refugee Convention.”

“The government should be protecting, not punishing, refugees,” he added.

Britain in March relaxed its immigration requirements for Ukrainians fleeing Russia’s invasion, after criticism it was not going far enough to accommodate refugees.

According to the latest government figures, some 86,100 visas had been issued as of Wednesday under amended rules for family members and a host family scheme for Ukrainians fleeing Russia’s invasion.

But even here, less than a third of those granted visas had actually arrived in Britain, with red tape blamed for holding up travel plans.

Queen Elizabeth II’s eldest son and heir, Prince Charles, waded into the issue on Thursday, as he visited a community centre in west London.

One woman, a qualified psychotherapist who fled Turkey 19 months ago, told him she was seeking asylum but was unable to work while her claim was being processed.

“We need to do something,” he said.

Ukrainian arrivals will be allowed to work and access welfare payments.