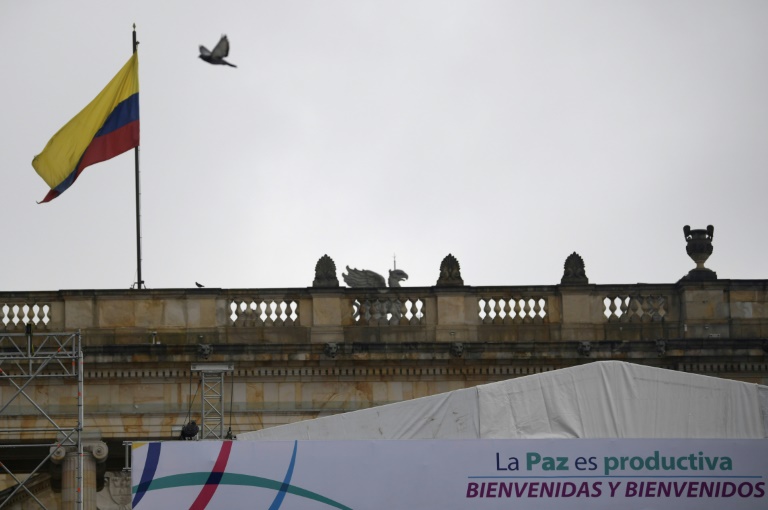 Colombia on Wednesday marked five years since the signing of historic peace accords that ended a near six-decade conflict that claimed tens of thousands of lives and left a legacy of violence.

Former combatants, victim representatives, the government and the head of the UN gathered at the headquarters of the Special Jurisdiction for Peace (JEP), a tribunal set up to adjudicate the worst crimes of the conflict that saw some nine million people killed, injured, kidnapped or displaced.

“We insist on apologizing to the victims of our actions during the conflict,” Rodrigo Londono, a former commander of the now-defunct Revolutionary Armed Forces of Colombia (FARC) guerrilla group, told the ceremony in Bogota.

“Our understanding of their pain grows daily in us and fills us with grief and shame,” said the fighter-turned politician formerly known by his war alias Timochenko.

Some 13,000 guerrillas have surrendered their arms since the signing of the peace pact in 2016, but violence persists in many regions of Colombia where FARC dissidents, who rejected the deal, continue to fight paramilitary and rebel groups and drug traffickers in the world’s largest cocaine-producing country.

Nearly 300 former fighters of the FARC, since transformed into a minority political party, have been killed in the last five years.

Former president Juan Manuel Santos, who was awarded a Nobel Peace Prize for negotiating with a guerilla group he had already beaten militarily, expressed “satisfaction” that his successor and political rival Ivan Duque was present at Wednesday’s commemoration.

Duque had in the past sought to alter the peace deal, which he and his right-wing party believe to be too soft on the FARC.

“The train of peace that so many had wanted to derail or stop is continuing its course,” said Santos.

“President Duque has gotten onto the peace train as we have seen with great satisfaction lately.”

Colombia is experiencing its most violent period since 2016 due to continued fighting between armed groups for control of drug fields, illegal gold mines and lucrative smuggling routes.

According to the Indepaz peace research institute, there are 90 armed groups with some 10,000 members active in the country.

They include more than 5,000 FARC dissidents who rejected peace, some 2,500 members of the National Liberation Army or ELN — the country’s last active guerrilla group, and another 2,500 right-wing paramilitary fighters.

Last month, the UN warned that the deteriorating security situation represented a “considerable challenge” to the country’s 2016 peace accords.

UN chief Antonio Guterres on Wednesday warned of “risks to peace” posed by “armed groups in connection with drug trafficking.”

“It is not too late to reverse this trend by concentrating all efforts … in places where violence is most intense,” he said, and vowed the “full support” of the United Nations.

Duque, for his part, repeated a call for “total truth” to emerge from the JEP, which has yet to pass a verdict.

The tribunal has the authority to offer alternatives to jail time to people who confess their crimes and make reparations to victims — a system some fear will let criminals get off scot-free.

So far, former FARC commanders have been charged with the kidnapping of at least 21,000 people and the recruitment of 18,000 minors, while senior military officials face charges of killing some 6,400 civilians presented as guerillas.

“All of us here want to see effective, timely, real justice,” said Duque.