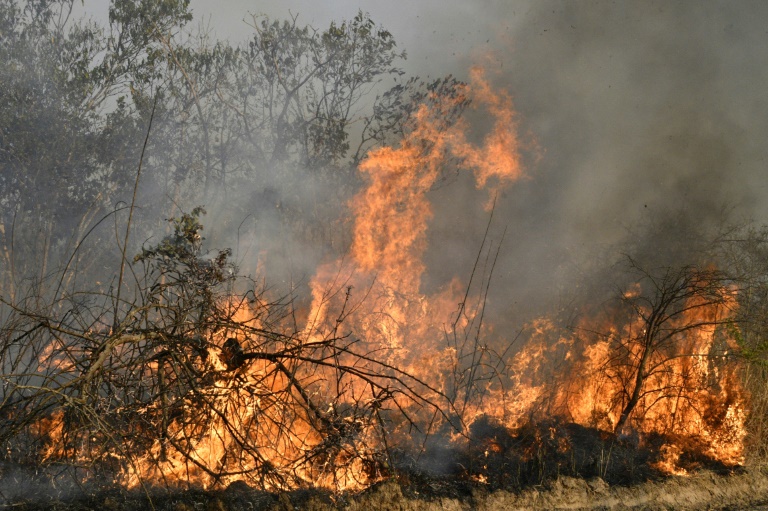 The road through San Matias, Bolivia, is a no man’s land. Hundreds of thousands of hectares of once lush forest are now a wasteland of twisted, carbonized tree stumps.

It is a protected area, but San Matias — which also hosts subsistence farmers, cattle ranches and quartz mines — burns every year as land is cleared for the next planting season.

The practice is legal during May and June, after the rainy season, with each farmer allowed to burn 20 hectares — also in the reserve located in Bolivia’s eastern Santa Cruz department, near the border with Brazil.

The limit is often deliberately exceeded, and the fines negligible. And increasingly, the fires just take on a life of their own, fueled by ever drier, hotter conditions.

“It came from that bush… over there!” said Antonio Tacuchava, 76, pointing to the spot where the most recent blaze came within a kilometer (0.6 miles) of his straw house in September.

A former farmer who now keeps a few chickens and other small animals for domestic consumption, Tacuchava is one of 130 families in Comunidad Candelaria, a hamlet at the gates of the San Matias park.

Like the handful of large, commercial ranches in the park, the subsistence farmers take part in the annual burning at the start of the dry season — before it gets too hot, dry and risky.

“A spark here, near these houses, is like a match,” said Tacuchava, with his neat white moustache and sun-tanned face.

Yet despite their precautions, multiple out-of-control fires raged around the settlement from July to September this year.

Authorities said wildfires, mostly originating from land-clearing activities, had scorched 2.6 million hectares of land in Santa Cruz in the first ten months of the year.

The Friends of Nature Foundation, a Bolivian NGO, estimates that forest fires destroyed more than 2.3 million hectares of forests and grassland in the country in 2020, and 6.4 million hectares in 2019.

According to the NGO Global Forest Watch, Bolivia in 2020 became the country with the third-largest loss of virgin forest after Brazil and the Democratic Republic of Congo — passing Indonesia for the first time.

It is a vicious cycle of climate change fueling forest fires, and vice versa.

According to green group WWF: “To have any chance of restricting the rise in global temperatures to 1.5 degrees Celsius in line with the Paris Agreement (on curbing climate change), more needs to be done to cut carbon emissions from forest fires.”

Already, the WWF said, fires in many parts of the world are bigger, more intense and longer-lasting than they used to be.

In 2009, Bolivia’s environment ministry estimated that at loss rates then, all the country’s forests would be gone by 2100.

Santa Cruz is the Bolivian department most affected by fires.

In San Matias park, which at 30,000 square kilometers (11,600 square miles) is the size of Belgium, the dirt roads are cracked and dry and lined with thousands of half-burnt trees that creak as they are slowly consumed from inside.

“There are places that have lost more than half their wealth of flora.”

Dalcy Cabrera, a housewife of 36, opens a tap in her house, but nothing comes out.

“In times of drought, there is no water,” she told AFP.

According to village chief Jorge Suarez, 54, “this year, we had no spring.” The rains that usually mark the arrival of spring only came months later.

“It is worse for the animals that live in the forest,” he said. “This worries me a lot.”

According to Catari, “most large animals can escape the fires because they move quickly, but reptiles like lizards and snakes get caught in the fire and become intoxicated with smoke because they don’t move fast.”

In Bolivia, one of the world’s most biodiverse countries, climate change and fires are threatening the survival of many species.

One of them is the hyacinth macaw, listed as “vulnerable” by the International Union for Conservation of Nature, with only about 4,300 individuals left.

There are some 300 in San Matias, trying to hatch eggs this year despite fires raging all around them.

Fire ash accumulates in bodies of water, asphyxiating fish and crustaceans that serve as food for other species including the park’s many lizards, which are at risk of “a mass die-off,” according to veterinarian Felix Rivas.

In this article:Bolivia, Climate change