That internal review found that the CIA had consistently overstated the value of intelligence gained during the cruel and brutal interrogations of some of its detainees, The New York Times reports.

The review, which ran to more than over 1,000 pages in length, became known as the Panetta Review after former CIA director Leon E. Panetta, who had ordered the review to be done in 2009. One of the report’s authors won an agency award for her work, according to a briefing given by the agency’s inspector general to staff of the Senate Intelligence Committee.

Now there’s a battle brewing over the contents of the Panetta Review, after the Intelligence Committee conclusions regarding the effectiveness of torture and allegations made by the CIA that committee staffers improperly took the review from an agency facility. The CIA has distanced itself from the report’s findings, calling the report incomplete and a cursory review of documents, and the agency has blocked its release under the Freedom of Information Act.

In a seemingly weird twist, the new Republican chairman of the Senate Intelligence Committee, Sen. Richard Burr of North Carolina, is demanding that the Obama administration return copies of the Senate panel’s recently completed report on the CIA’s brutal interrogations of terrorism suspects, The Washington Post reports. This move is apparently an attempt to keep the full version of the report from being released to the public, U.S. officials say.

Burr sent a letter to President Barack Obama last week demanding “that all copies of the full and final report in the possession of the executive branch be returned immediately,” officials said.

Burr’s letter is the latest twist in the committee’s six-year investigation on the CIA’s use of torture after the Sept. 11, 2001 attacks, and the investigation was carried out exclusively by Democrats on the panel after GOP members withdrew from the project.

The findings, released last month, revealed fresh allegations of abuse in the CIA program and accused the agency of systematically exaggerating the efficacy of methods others had denounced as torture, The Washington Post reports.

Burr, however, wants the still-classified version of the committee’s report, and that document spans over 6,900 pages and contains specific details about CIA operatives and the agency’s secret prison program — information that was removed from the publicly released file.

Burr’s request puts the White House in a bit of a spot, politically. Obama has decried the agency’s interrogation methods as torture and ordered the program dismantled shortly after he took office. However, since taking office, he’s also been pressured to defend the agency he has heavily relied on in counter-terrorism efforts, and the White House has sparred on numerous occasions over how much of the report should be released.

Sen. Dianne Feinstein (D-Calif.), the former chairman of the committee, delivered the full-length version of the report to the White House, CIA, FBI, as well as other agencies last month, The Washington Post reports.

As could be expected, Burr has been complaining about Feinstein sending the huge 6,700 page Senate Intelligence Committee report to the various agencies and departments within the executive branch and he’s requesting that all copies of the report be “returned immediately,” according to those who have seen the letter, Common Dreams reports.

Feinstein is hanging tough, and responded to Burr’s statements.

“I strongly disagree that the administration should relinquish copies of the full committee study, which contains far more detailed records than the public executive summary. Doing so would limit the ability to learn lessons from this sad chapter in America’s history and omit from the record two years of work, including changes made to the committee’s 2012 report following extensive discussion with the CIA.”

When she introduced the report to the Senate, she characterized the CIA’s actions as “a stain on U.S. History,” BBC News reports.

“The release of this 500-page summary cannot remove that stain, but it can and does say to our people and the world that America is big enough to admit when it’s wrong and confident enough to learn from its mistakes,” she said.

“Under any common meaning of the term, CIA detainees were tortured,” she added.

Part of Burr’s hand-wringing may well have been due to the fact that not only did distributing the report increase the number of copies in circulation, it also made it likelier that some portions of the report may be released someday to the public via the Freedom of Information Act requests or through other means. Executive branch agencies are obligated to respond to these types of requests but Congress is less susceptible to disclosure requirements.

Feinstein was the previous chair of the committee and during this time Burr opposed the investigation into the CIA’s practices, and allegedly claimed that this was an effort to discredit the agency and the Bush administration, Common Dreams reports.

However, the scrutiny has intensified on the Panetta review. Former Democratic Sen. Mark Udall disclosed the existence of the review during an open hearing in December 2013, Common Dreams reports. Lawmakers who have seen the review also say that the CIA had exaggerated the value of intelligence gained during the brutal interrogations that some detainees were subjected to.

The New York Times reports that one of the review’s findings, according to people who have seen the document, is that the CIA repeatedly claimed that key intelligence to prevent terror plots and track down Al-Qaeda operatives came from the interrogation sessions of Khalid Shaikh Mohammed. However, the intelligence came from other origins.

The agency has long considered the interrogation of Mohammed integral to disrupting numerous terror plots, including plans by Al-Qaeda to attack the West Coast, especially since Mohammed is considered to have been a chief planner of the Sept. 11 attacks. As such, he was one of the detainees subjected to some of the most brutal interrogation methods, including waterboarding.

As he prepared to leave office last month, Udall, speaking before the Senate, revealed more details about the review and highlighted the inconsistencies between it and other CIA statements, Common Dreams reports.

“In my view, the Panetta Review is a smoking gun,” Udall said on December 10, 2014. “It raises fundamental questions about why a review the CIA conducted internally years ago and never provided to the committee is so different from the official [John] Brennan response and so different from the public statements of former CIA officials.”

“The Panetta Review found that the CIA repeatedly provided inaccurate information to the Congress, the president, and the public on the efficacy of its coercive techniques,” he continued. “The Panetta review further identifies cases in which the CIA used coercive techniques when it had no basis for determining whether a detainee had critical intelligence at all. In other words, CIA tortured detainees to confirm they didn’t have intelligence, not because they thought they did.”

It almost seems as if no one administering the torture ever stopped to ask whether or not the detainees being tortured might break under pressure and lie in order to avoid the extreme pain they were subjected to. Did no one ever think of this?

The CIA has a long history of torture and the agency has had plenty of practice that began long before people were detained at Guantanamo and Abu Ghraib.

As Slate reports, in the 20th century, most who tortured preferred to use methods that left no marks. Known as clean torture, there were two different types: French modern, which combines water and electric torture. The second type is called Anglo-Saxon modern, which combines sleep deprivation, positional and restraint tortures, temperature extremes, noise, and beatings. 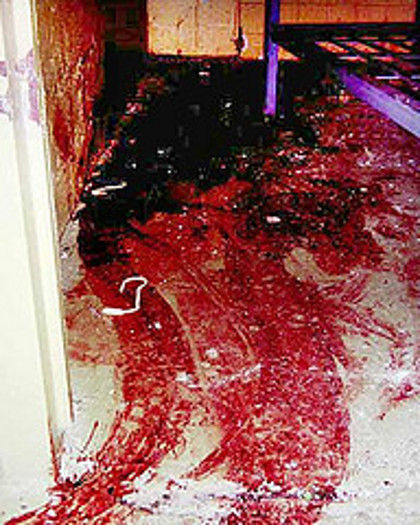 The torture for several of the detainees appeared to fit the Anglo-Saxon modern method.

Some of the methods used by the CIA on the detainees:

• The ice-water cure. This technique was developed during World War I and used on conscientious objectors who were incarcerated in military prisons. The objectors were subjected to ice-water showers and baths until they fainted. Detainee Walid bin Attash was subjected to something along these lines.

“On a daily basis during the first two weeks I was made to lie on a plastic sheet placed on the floor which would then be lifted at the edges,” he told the Red Cross. “Cold water was then poured onto my body with buckets … I would be kept wrapped inside the sheet with the cold water for several minutes. I would then be taken for interrogation.”

• Cold Cell. The first recorded case occurred in 1961, when guards at a Mississippi state penitentiary blasted civil rights detainees with fire hoses and then turned on the air-conditioning system at full blast for three days. In the case of Abu Zubaydah, another detainee, he woke up naked and strapped to a bed in a white room. The cell and the room were air-conditioned and very cold and he sat shackled to a chair for two to three weeks, he said. Cold cell torture is one of six known authorized interrogation methods used by the CIA.

• Sweat boxes and coubarils. Sweat boxes, Slate reports, originated in Asian penal colonies. Coubarils, which are tiny boxes that people can neither stand up in or lie down, originated in French penal colonies in New Guinea during the 19th century. Zubaydah was tormented with both of these methods, and when he was placed in the smaller box, he was forced to crouch for hours, until “the stress on my legs held in this position meant my wounds both in the leg and stomach became very painful.”

Current news media reports are acting like this is something new, but torture is not new to the U.S. and it’s been going on for decades. If you’re curious to see exactly what the U.S. perpetrated in torturing thousands of people all around the world, check this out.

Hopefully with these recent revelations, those involved in such horrendous cruelty will rethink their paradigm.