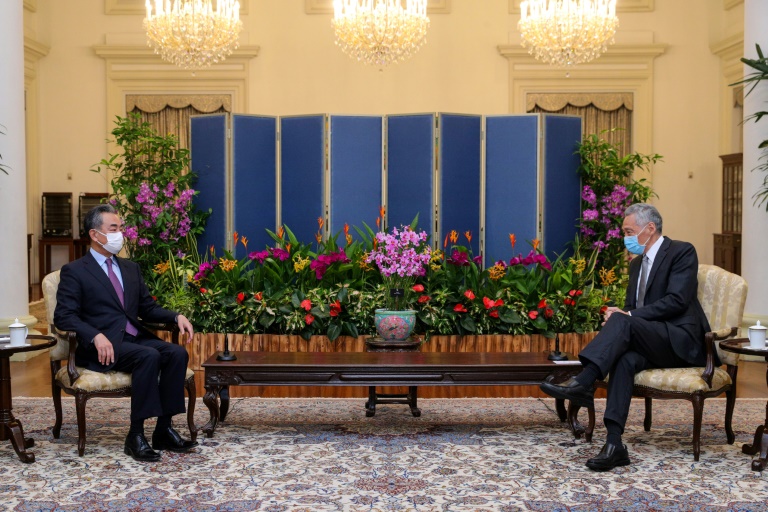 China’s foreign minister held talks with Singaporean leader Lee Hsien Loong Tuesday during a Southeast Asian tour seen as a pushback against Washington’s efforts to reassert its influence in the region.

In recent weeks, both US Vice President Kamala Harris and Pentagon chief Lloyd Austin have visited the city-state and strongly criticised Beijing’s growing aggression in Asia.

The trips were part of efforts by the new US administration to reset relations in the region after the turbulent Donald Trump era, and build a bulwark against China’s rising might.

As well as Singapore, Foreign Minister Wang Yi had stops in Vietnam and Cambodia on his trip — both countries visited by senior US officials in recent months.

On Tuesday he held talks with Singaporean Prime Minister Lee, who said the pair had a “productive and candid discussion on international and regional developments”.

He also met with the city-state’s foreign minister and deputy prime minister a day earlier.

Southeast Asia is an increasingly important battleground for influence for the world’s two biggest economies at a time when Beijing is challenging Washington’s political sway and naval dominance in the region.

“The Chinese leadership wants to remain on the radar of Southeast Asian countries which are practising very pragmatic hedging between the United States and China,” Izzuddin told AFP.

Singapore, which has strong security ties with Washington and vibrant economic relations with Beijing, has said countries should not be made to choose between China and the US.

China’s claims to almost all of the resource-rich South China Sea, through which trillions of dollars in shipping trade passes annually, have long stoked tensions with rival claimants in Asia.

US officials have repeatedly denounced Beijing’s claims as illegal.

The US-China relationship has deteriorated over a range of issues from cybersecurity and tech supremacy to human rights in Hong Kong and Xinjiang.