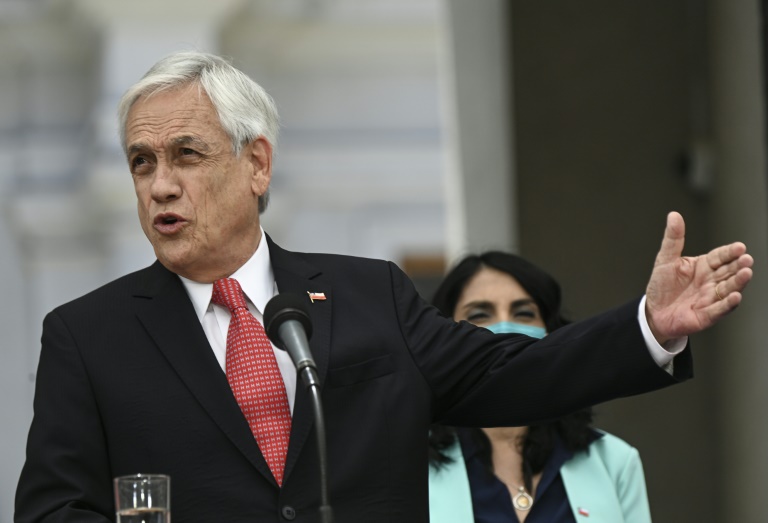 Chile’s President Sebastian Pinera modernized the political right to distance it from the Augusto Pinochet dictatorship, but a social crisis that broke out in 2019 will see him leave power with his popularity in tatters.

The billionaire leader, 71, who cannot stand for reelection in Sunday’s voting, has served two non-consecutive mandates.

His second term, which ends in March, has been beset by numerous problems, not least the coronavirus pandemic.

But he has also had to deal with a social uprising, accusations of graft and an impeachment bid that was quashed on Tuesday by the Senate.

“The morning after the social outbreak was the end of the Pinera government politically and in terms of influence,” elections analyst Axel Callis told AFP.

Pinera’s early attempts to calm protests against social injustice were at best clumsy.

A rich businessman seen as the embodiment of the country’s economic, political and institutional injustices, Pinera’s martial tone and early decision to deploy the military proved disastrous.

Not long beforehand, he had described Chile as an “oasis” in Latin America due to its robust economy and political stability.

The unprecedented protests convinced parliament to agree to hold a referendum on changing the country’s dictatorship-era constitution — and a year later the people voted overwhelmingly (78 percent) in favor of change.

Pinera, who failed to either propose or support the move, again appeared out of touch with the people he governed.

“What happened was a change in the axis of power,” said Callis.

“In one way or another, a parliamentary system was installed, without the corresponding institutionality — Chile is a presidential system — and everything in terms of relevant politics started happening in parliament.”

The executive found itself confined to the back benches and Pinera “ceased to be a valued, strategic or significant actor.”

The pandemic could not have hit at a worse time.

While Chile can pride itself on its rapid vaccine roll-out — 90 percent of those eligible amongst the 19 million population are fully immunized — the government’s procrastination in distributing aid prevented Pinera from regaining the people’s trust.

Even less so his implication in the Pandora Papers, suspected of a conflict of interests over the sale of a mine by members of his family to a close friend, and completed in a tax haven.

While the Senate blocked opposition attempts to impeach Pinera, he remains the subject of a graft investigation.

With five months left of his term, Pinera’s popularity has plunged to its lowest level at 12 percent, compared to 50 percent when he ended his first term in 2014.

In 2010, the Harvard-educated economist convinced the electorate that his personal success in business — according to Forbes in 2018, Pineras was worth $2.8 billion — could be transferred to the benefit of society.

He managed to bring back to power a revamped right-wing that had rid itself of the baggage of being associated with Pinochet’s dictatorship.

During his first term he branded civilian defenders of the dictatorship as “passive accomplices” and closed a special jail set up for human rights abusers.

“Pinera wanted to represent a modern, democratic right-wing,” Claudia Heiss, a professor of political sciences at the University of Chile, told AFP.

“He wanted to definitively end the transition” to democracy and “end the divisions that came from the dictatorship.”

But his second mandate saw him “oscillate between two versions” of democracy, leaving him in “an ambiguous position,” notably when it came to changing the constitution.

“He was never very clear … he never wanted to say he was for or against” changing the constitution, said Heiss.

She says this fence-sitting served only to weaken the right-wing and facilitate the rise of far-right presidential candidate Jose Antonio Kast, a harsh critic of Pinera’s.

Polls even predict Kast will deny Pinera’s favored candidate Sebastian Sichel a place in the second round run-off.

In any case, the damage done to Chile’s right-wing under Pinera has resulted in left-wing candidate Gabriel Boric being the election favorite.