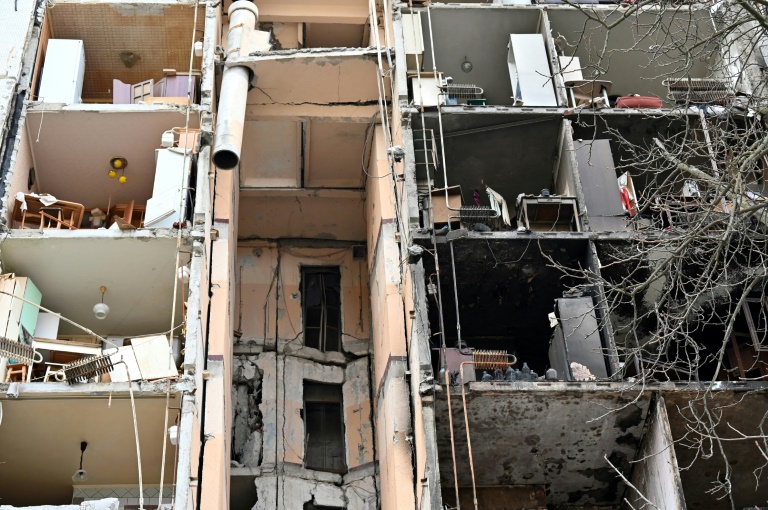 In the dank basement of a children’s hospital in Chernigiv there are cave paintings on the wall — tiny handprints, a smeared rainbow, a fluttering Ukrainian flag.

After Russian bombs began to fall on February 24 the underage patients came here to wait out the fury being visited on the city above.

They daubed the walls to pass the hours and days. Some wrote their names inside the silhouette of a cluster of balloons: Myroslava, Vasylyna, Glasha, Ulya.

“I did not count them, but there were quite a lot,” said 30 year-old Natalia, a member of Ukraine’s territorial defence forces, barely visible in the stifling gloom.

Before Russia launched the war she was an interior designer. But this is a dwelling no reasonable person would choose, least of all for children.

The entrance to the stairwell has been smashed through a wall. There is head-splitting pipework hidden in the dim. The odour of damp hangs thick in the air.

“We are very grateful that the children were taken out before we had no electricity, no water and no heat,” she said.

“Not all, but most of the children were taken out before all these benefits of civilisation disappeared.”

“They got a chance to survive.”

Chernigiv — just 50 kilometres (31 miles) from the border with Belarus — was swiftly encircled in the early days of the invasion ordered by Russian President Vladimir Putin.

Moscow’s forces did not take the city but it was pounded with artillery and air strikes for more than a month before troops withdrew in recent days, regrouping for an offensive in eastern Ukraine.

Signs of the siege they waged to take this foothold towards the capital Kyiv are everywhere.

Apartment blocks have been gored by blasts. A hotel has a semicircle missing from its top half, as though the sky has taken a bite from above. The football stadium has been pummelled into its pitch.

The children’s hospital has also been marked by the deluge. On the upper floor there is a puckered, charred wound from an incoming strike. The windows are flecked with holes.

Now it is being used to store aid supplies. The children — cancer patients among them — are no longer here. They have been transported south.

But there are clues of the traumas they endured. On a ledge outside, a plastic bag of Lego is paired with another collection of trinkets — shrapnel garnered from the hospital grounds.

“Cluster bombs were flying, we have traces of these bombs,” said 51-year-old Olena Makoviy. “The injured were brought to the children’s hospital, both adults and children.”

“It was very scary here from the first days of the war,” she said. “They brought guys, handsome, young, but no longer alive.”

City officials estimate around 350 civilians have been killed in Chernigiv.

Civilians died waiting in line for water and bread, and in early March an air strike on a 12-storey residential building claimed 45 to 50 lives, he said.

All of these bodies have been buried in a mass grave by fellow citizens, in a cleared patch of forest land.

Galyna Troyanovska, 66, has come to look for the son of a friend buried among the forest of grave markers staked in the mud.

Like the children of Chernigiv, she has been living underground.

“We did not go out of the basements,” she said. “There was no water, no light, no gas, the walls were trembling.”

“We try not to cry, we have already cried before,” she adds. “We hold back, we need to live on.”