The hurricane has picked up some forward speed and is now moving to the north-northeast at 16 mph (26 kph). The minimum central pressure is 988 mb (29.18 inches).

A Storm Surge Warning means there is a danger of life-threatening inundation, from rising water moving inland from the coastline, in the indicated locations. A Hurricane Warning means that hurricane conditions are expected somewhere within the warning area.

Tropical Storm Warnings are in effect from Edisto Beach South Carolina cleaqr on up the East coast to Martha’s Vineyard,, Nantucket, and Block Island. A Tropical Storm Watch is in effect for North of Stonington to Eastport Maine.

BREAKING: #Isaias has strengthened to a Category 1 hurricane, just hours before anticipated landfall.

We are live all night covering the storm! pic.twitter.com/9EN4kZeXln


On the forecast track, the center of Isaias will approach the coasts of northeastern South Carolina and southern North Carolina within the hurricane warning area during the next few hours. The center will then move inland across eastern North Carolina early Tuesday morning, move along the coast of the mid-Atlantic states on Tuesday, and continue across the northeastern
United States Tuesday night. 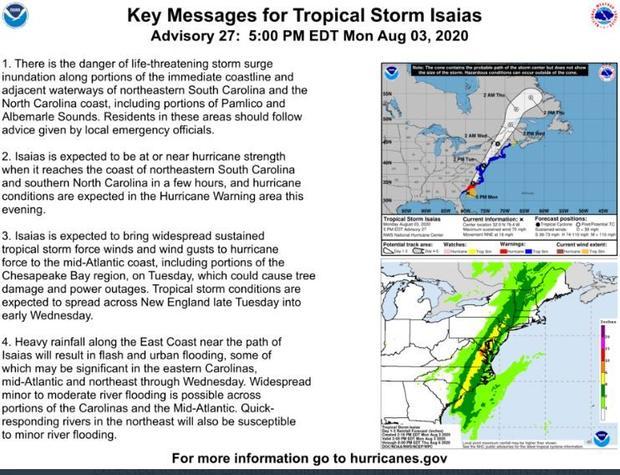 The NHC says it is possible that Isaias could strengthen even further before it makes landfall tonight. Then there will be a slow and gradual weakening of the storm as it begins its trek up the mid-Atlantic coast.

Rainfall with this storm will be heavy, with the Carolinas and the Mid-Atlantic: getting 3 to 6 inches of rain with isolated maximum totals of 8 inches. Heavy rainfall along the East Coast, near the path of Isaias, will result in flash and urban flooding, some of which may be significant in the eastern Carolinas, Mid-Atlantic and Northeast through Wednesday.