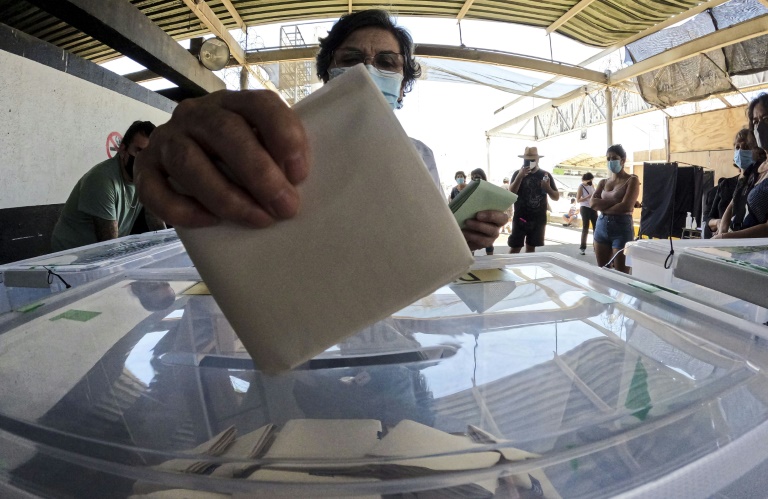 Two men on polar opposites of Chile’s political spectrum took a convincing lead in a first-round presidential election Sunday, two years after protests that set the country on the path to constitutional change.

With 65 percent of votes counted, far-right candidate Jose Antonio Kast, 55, of the Republican Party, was ahead with 28.4 percent of the vote, followed by leftist lawmaker Gabriel Boric, 35, of the Approve Dignity alliance with 24.9 percent, the Servel electoral service said.

The next closest candidate out of seven in the race had just over 13 percent.

If no candidate wins 50 percent of votes outright, a runoff between the top two contenders will be held on December 19.

Chileans went to the ballot box for the fourth time in 18 months Sunday, this time for a president who will be in office as the country drafts its first post-dictatorship constitution.

With half of the country’s 15 million voters said to be undecided ahead of Sunday’s ballot, it was seen as the most wide-open presidential contest in decades.

Coming in the aftermath of a popular revolt against deep social inequality, the election appeared to continue the recent rout of traditional political parties that have governed over decades of neoliberal policy credited with Chile’s relative wealth, but criticized for forsaking the poor and working classes.

Kast and Boric are both from minority parties not in government and not part of the established coalitions which have governed Chile since the exit of dictator Augusto Pinochet 31 years ago.

Centrists, including the candidate from unpopular President Sebastian Pinera’s party — Sebastian Sichel — proved the least popular in opinion polls ahead of the vote.

Sichel, who placed fourth, made a concession speech Sunday in which he congratulated Kast and said he would not vote for Boric.

Sunday’s poll comes two years after dozens of people died during weeks of demonstrations against low salaries and pensions, poor public health care and education, and in the words of a recent OECD report, “persistently high inequality” between rich and poor.

The protesters demanded a new constitution.

The government finally agreed to a referendum, which one year later gave the go-ahead for a new founding law for Chile to be drawn up by an elected body.

Elections for the drafting body were held in May this year, with voters rejecting traditional political parties and opting in large part for independent, left-leaning, candidates.

Chileans will vote in a mandatory referendum next year to adopt or reject the new document.

On Sunday, the country of 19 million people also voted to replace the 155-member Chamber of Deputies and almost two-thirds of senators for a new-look Congress.

“We have to vote, the country needs changes,” said voter Felipe Rojas, 24. “We are bored with the same politicians.”

For Cristina Arellano, a 42-year-old accountant, it was imperative to vote “to turn the page on the division and trouble in the streets.”

Boric, who has promised to install a “welfare state” if he wins, cast his vote in his native city of Punta Arenas in Chile’s south, saying: “May hope win out over fear.”

His rival Kast has expressed admiration for Pinochet, opposes gay marriage and abortion, and campaigned on restoring order and security.

His second, non-consecutive term beset by economic and social upheaval, billionaire Pinera approaches the end of his mandate with record-low approval.

The country’s economic woes have worsened with the coronavirus epidemic, amid high unemployment, inflation at six percent and skyrocketing government debt as demand for social aid and subsidies exploded.

One thing is clear: many Chileans want a more interventionist and socially minded government, better access to public health care and education, and changes to the pension system, which is privately administered.

But analysts have also observed a recent rightward swing attributed to sometimes violent protests — also due to growing concerns about immigration and crime.