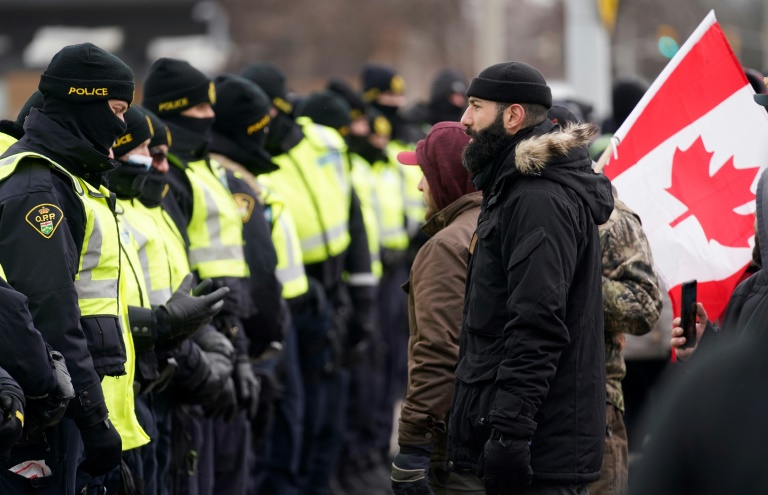 Canadian police on Saturday began clearing a key bridge of truckers protesting Covid-19 restrictions, even as authorities in Ottawa braced for renewed demonstrations expected to bring thousands to the federal capital.

The provincial supreme court in Ontario had ordered truckers to end their blockade of the strategic Ambassador Bridge, which links the city of Windsor in Canada to Detroit, Michigan in the US.

The protest has forced major automakers in both countries to halt or scale back production, and Washington on Friday urged Ottawa to use its federal powers to end the blockade.

Ontario province, heavily dependent on the auto industry, has declared a state of emergency.

But while Canadian police began the process of clearing the Ambassador Bridge — tents erected in traffic lanes were taken down, and some trucks had left the scene by mid-morning Saturday — protests continued, there and elsewhere.

As police backed by armored vehicles advanced slowly on the bridge, dozens of demonstrators continued to block the way.

“Enforcement continuing, individuals who are located within the demonstration area are subject to arrest,” the Windsor police warned on Twitter. “People are advised to immediately vacate the area.”

The protesters have been warned that they could face heavy fines, jail time and loss of their driver’s licenses if they continue obstructing traffic.

The Ambassador Bridge is vital to the US and Canadian auto industries, carrying more than 25 percent of merchandise exported by both countries.

Two other US-Canada border crossings remain blocked by protests: one linking Manitoba province to the US state of North Dakota, and a second one in Alberta province.

On Saturday morning, crowds of protesters were collecting in Ottawa — the epicenter of the movement — for the third consecutive weekend.

Hundreds of people, some waving Canadian flags, again occupied the city center, walking under snowy skies between the huge trucks that have paralyzed the capital and infuriated many locals.

“I’ve been supporting the cause from the beginning,” said 38-year-old Marc-Andre Mallette, whose backpack bore patches representing both the Canadian and the Quebec flags.

“I’m not vaccinated, and I’m not dead,” added Mallette, a sewer worker from the town of St.-Armand, near the US border.

John Pacheco, who said he has been coming to the demonstrations three times a week, brought his 15-year-old daughter Sophia on Saturday.

Describing himself as a “Catholic activist,” he said he is happy to see that the truckers’ movement has spread, with copycat protests in France, the Netherlands and New Zealand.

Protests began about two weeks ago when demonstrators drove into Ottawa to demand an end to a vaccination requirement affecting truckers crossing the international border.

But the movement has spread, as the protesters — mostly insisting they want to protect their freedoms, but some displaying swastikas or Confederate flags — are now demanding an end to all vaccine mandates, whether imposed by the federal or provincial governments.

Anti-Trudeau signs and chants have become common along the clogged Ottawa streets.

The prime minister is facing heavy criticism as political opponents say he has been too slow to bring the  protests to an end.

Trudeau has repeatedly insisted that the protesters represent a small — if noisy — fraction of a population that has largely gone along with vaccination requirements and guidance.

But in several Canadian provinces anti-Covid measures have been more restrictive than in much of the world, and the truckers’ message has resonated more widely than the authorities expected.

One opinion survey found that one-third of Canadians support the protest movement, while 44 percent say they at least understand the truckers’ frustrations.

Since the movement began, some central Canadian provinces have announced plans to end mask and vaccine requirements in coming weeks, with the numbers of Covid-19 cases falling.

But the two most populous provinces — Ontario and Quebec — have yet to follow suit.

The truckers have found support among conservatives and vaccine mandate opponents across the globe.

In Paris on Saturday, police fired teargas and issued hundreds of fines in an effort to break up convoys of vehicles from across France that were attempting to converge on the Champs-Elysees in a protest over Covid restrictions and rising living costs.

And in the Netherlands, a vehicle convoy brought The Hague’s city center to a standstill in another protest against coronavirus restrictions.