Even though they are only about the size of a nickel, zebra and quagga mussels explode into enormous colonies in freshwater lakes and rivers, where they filter out the nutrients that other species depend on for survival, The Daily Brew reports. Producing toxic algae blooms that kill fish and birds, their sharp shells litter lake beds and they cluster together by the thousands, clogging intake pipes that we use for water supplies and power plants.

Even worse, they have no natural predators, and no one knows how to eradicate them without harming the ecosystem.

They are quite cosmopolitan and spread from one continent to another by clinging on hulls, engines, anchors and numerous other surfaces. They also hitchhike on barges and sea planes, and their microscopic larvae can be carried in water via bait buckets or other equipment.

In an effort to stem their progression, Alberta drew up new legislation that went into effect in April.

According to Alberta Environment and Parks (AEP), if highway signs indicate a watercraft inspection station is open, “it is mandatory that all carriers of water-based vessels must report to the on-site inspectors to have their boats, trailers, and other water-related equipment checked for invasive species such as the zebra and quagga mussels.”

That’s where the three mussel-sniffing pooches come in, CBC News reports. The dogs, accompanied by their handlers, inspect boats on land before they are launched in another body of water to make sure they don’t spread the invasive bivalves to British Columbia and beyond. 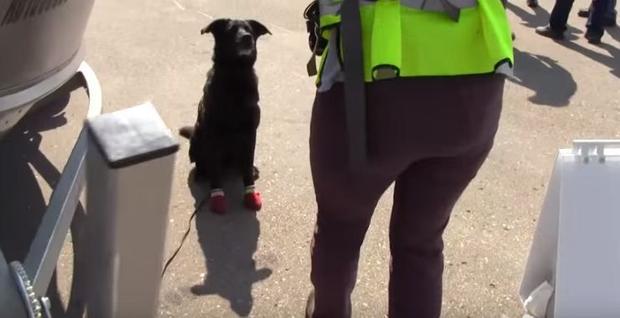 The biggest worry for the team right now are “snowbirds,” Canadians who bring boats back home from U.S. lakes and rivers.

“Our dogs can sniff all across that boat, in the different nooks and crannies where the mussels like to hide,” Cindy Sawchuk, coordinator of Alberta’s Conservation K-9 program, told CBC News.

If the dogs find the mussels, they’ll alert their handler and get a reward for their efforts, said Sawchuck, who is speaking Tuesday night at a forum with the Invasive Species Council of B.C

She noted that boaters should always ‘Clean, Drain, Dry’ their vessels each time they leave a body of water in order to prevent transporting the invasive mussels.

According to the council, invasive species cause more than $1.4 billion in damages and economic loss. That’s nearly five percent of the global economy.

Sawchuck said it takes a special kind of dog to do this work. Many of them are found in shelters, but less than 1 in 1,000 have what it takes to become a working dog. Her dog Hilo is one of them.

Because these dogs are highly energetic, they don’t make good family pets, she added, noting “they really need a job to do.”

If zebra or quagga mussels are found on a vessel, inspectors will work to decontaminate it and may order it to be quarantined for as much as 30 days, The Daily Brew reports. That’s because the mussels can survive for that long out of the water.

The AEP said it’s taking these steps to protect Alberta’s waters from invasive aquatic species that pose threats to native fisheries, water quality, local economies and industries. An infestation could be expensive, and officials estimate it could cost the province more than $75 million a year.