The combined capacity of renewables (wind, solar, biomass, hydro and others) in the UK reached 42 GW in the third quarter of 2018 while the capacity from fossil fuels fell to 40.6 GW, according to research by Imperial College London for coal and biomass generator Drax’s Electric Insights third-quarter report, released on Tuesday.

At the start of this decade, Britain had seven times more generating capacity from coal, oil, and gas as it had from renewables. However, putting into action the UK’s plan of increasing its renewable output and closing down its coal-fired power plants by 2025 in order to meet its climate goals appears to be succeeding.

“A third of fossil fuel generating capacity has retired over the last five years – whilst the capacity from wind, solar, biomass, hydro and other renewables has tripled,” the report said. 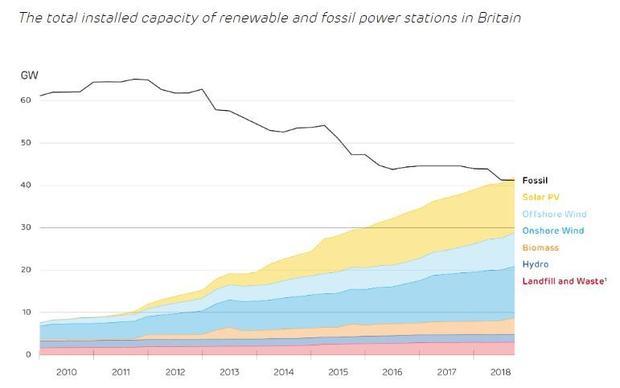 The UK saw its renewable electricity capacity get a big boost this year with the addition of a number of offshore wind projects, including the Walney Extension which at 660 megawatts is the world’s largest offshore wind farm. Breaking down renewable capacity this quarter, Britain now has over 20 GW of wind power capacity, 13 GW of solar and 3.2 GW of biomass.

Drax also notes that the key to keeping costs down is the creation of a more flexible energy system. According to Electric Insights, “the costs for balancing the grid spike when the output from renewables is high – and there were 58 spikes during the third quarter – resulted in a situation where the cost of managing the electricity flow was greater than the cost of actually generating electricity.”