According to a report by researchers at Imperial College in London showed that between April and June of this year there were as many coal-free hours as in the whole of 2016 and 2017 combined. Now, that is an amazing accomplishment and a testament to Great Britain’s efforts to transition to a low-carbon economy.

Of particular interest is the fact that during a recent, very hot and dry period in June, there were 12 days where the share of fossil fuel used to produce power was zero, reports the Yorkshire Post.

“For the third summer in a row, coal is edging closer to extinction in Britain,” commented lead author Dr. Iain Staffell, noting that coal supplied a mere 1.3 percent of electricity over the quarter. Its share also fell below 1 percent for the first time across June.

In the latest quarterly report from DRAX, covering the period April through June 2018, it was stated that Britain’s coal fleet ran at just three percent of its capacity. 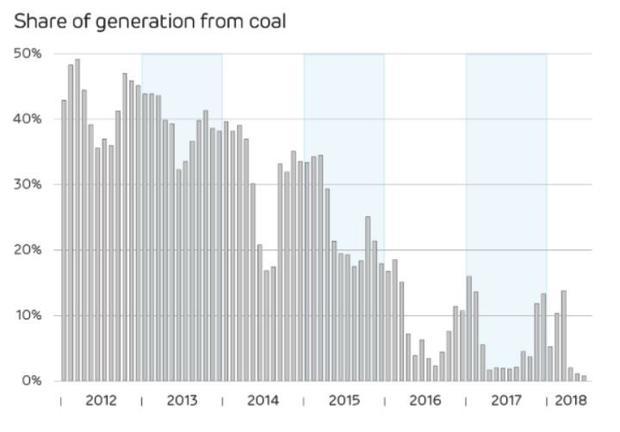 Not so good news about greenhouse gasses
As DRAX points out, thirty years ago, coal provided 38 percent of the world’s electricity. Today, it still provides 38 percent. So it seems like we haven’t moved one bit in reducing the planet’s dependence on coal.

Africa and the Middle East rely primarily on their abundant supplies of natural gas and oil, with the exception of South Africa, which still gets 88 percent of its electricity from coal. South America relies heavily on hydropower, which is abundant. So which countries are still reliant on coal?

The biggest users of coal today are Asia. China, South Korea, India, and Indonesia. These nations collectively are now burning 10 times more coal than they did 30 years ago, led by China and India. Interestingly, the DRAX report pegs North Korea as an unlikely climate champion. The country has cut its reliance on coal in half, to 20 percent.

The report concludes: “Still, the UK is leading by example: coal generation has fallen by four-fifths in just five years. If the world followed suit, one can only hope that in another thirty years, coal does not still provide 38 percent of global electricity.