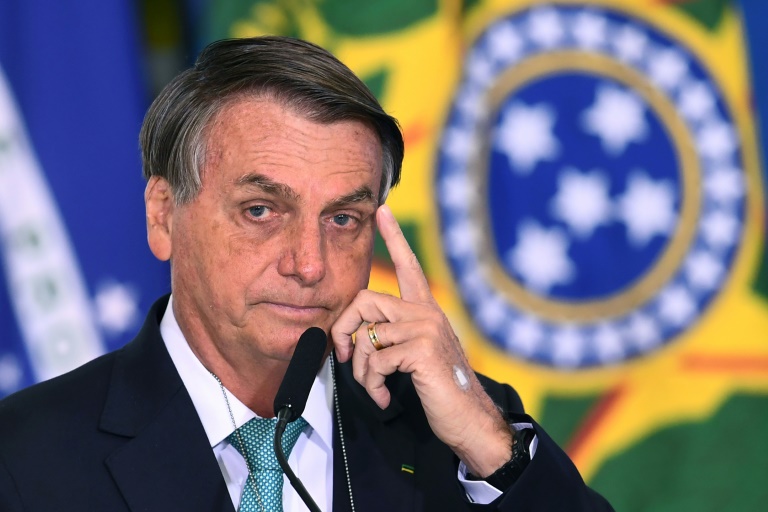 They say Brazil is polarized under far-right President Jair Bolsonaro, but the divide was literal Friday, when he boarded a commercial plane to greet supporters in the front — as opponents booed him at the top of their lungs from the back.

Visiting the southeastern state of Espirito Santo to inaugurate a public works project, Bolsonaro took a moment at the airport to briefly enter a departing plane and say hello.

It was all smiles in the roomier, more-expensive front of the plane, as seen in a video he posted on Twitter of himself snapping selfies with passengers and crew.

But videos from the back of coach posted on social media show a riotous scene as passengers waved the middle finger and hurled protest slogans at the president, including “Get out, Bolsonaro!” and “Genocidal maniac!”

That is a reference to the president’s widely questioned handling of Covid-19, which has claimed more than 480,000 lives in Brazil, second only to the United States.

Responding to the boos, Bolsonaro removed his face mask to joke, “Those people saying ‘Get out, Bolsonaro’ should be traveling by donkey.”

Brazilian media reports said he had also removed his mask in the airport, in violation of regulations in place to contain the pandemic.

The president’s office did not immediately respond to a request for comment.

Bolsonaro has frequently criticized face masks, lockdowns and vaccines to fight the pandemic, instead touting the medication chloroquine despite studies showing it is ineffective against Covid-19.

The plane episode turned into a top trending topic on Twitter in Brazil, under the tag “ForaBolsonaro” (Get out, Bolsonaro).

The president’s disapproval rating has risen sharply along with the death toll from Covid-19, and opponents are increasingly ready to take to the streets in protest despite the pandemic.

They have called for new demonstrations Sunday, on the opening day of the Copa America, the South American football championships.

Bolsonaro controversially defied warnings from epidemiologists to bring the tournament to Brazil when original hosts Argentina and Colombia fell through because of surging Covid-19 caseloads and social unrest.