UK’s official weather predicting service, the Met Office, has issued a warning that blood rain will fall on the country tonight and tomorrow morning. A toxic smog alert has been issued.

“Blood rain” is the term used to describe a meteorological event when rain mixes with sand from the deserts of North Africa. Sand from the Sahara has been swept up by desert storms and carried 2,000 miles to the UK by exceptional north winds.

When the sand mixes with rain, the precipitation takes on a reddish color and blankets the country with a paste of fine dust and water, which sticks to everything.

“The dust is produced from source areas in North Africa, incorporated into a northerly airflow and can travel long distances before being deposited as far away as the UK.”

Dan Williams a Met Office representative predicted that “People could find yellow or brown dust from the Sahara on their cars on Saturday morning.”

To make things worse, the UK is experiencing high temperatures into the 20C (70F+) and pollen levels are way above normal. On top of this, pollution is simultaneously floating in from industrial areas of northern France and Belgium, making the British air a toxic mix of sand, dirt and allergens. Visibility has been severely reduced by smog in London. 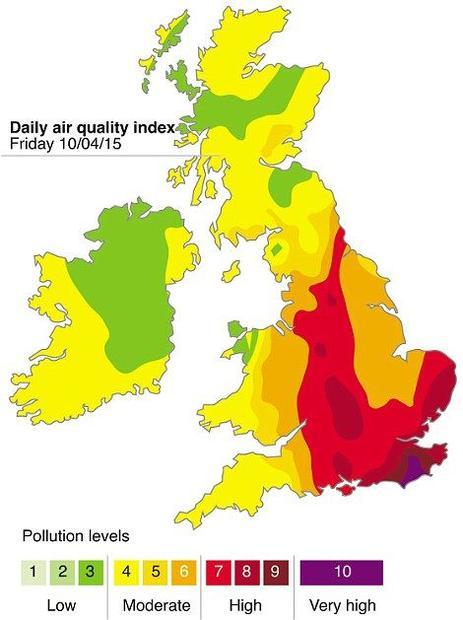 The Express says that Dr Sotiris Vardoulakis, who is head of the air pollution and climate change group at PHE’s Centre for Radiation, Chemical and Environmental Hazards, warned people.

“Some individuals, particularly those with existing heart or lung conditions, may experience increased symptoms.”

“On occasions where levels are high, adults and children with lung problems, and adults with heart problems, should reduce strenuous physical exertion, particularly outdoors, and particularly if they experience symptoms.”

“People with asthma may find they need to use their reliever inhaler more often. Older people should also reduce physical exertion.”

Blood rain usually falls more often in southern Spain or the south of France. But last week desert storms in the Arabian peninsular caused similar problems in India. It can happen perhaps once a year in the UK if conditions are right and it has been known to fall as far north as Scandinavia.

The Telegraph notes that it has been recorded in the history books on frequent occasions.

“In ancient times ‘blood rain’ was believed to be actual blood and considered a bad omen, heralding death and destruction. It is mentioned in Homer’s Iliad and in Geoffrey of Monmouth’s tales of King Arthur.”

“The Anglo Saxon Chronicle records that in 685, “there was a bloody rain in Britain. And milk and butter were turned to blood. And Lothere, king of Kent, died”

“The historian William of Newburgh also claimed that Richard the Lionheart was caught in a shower of ‘blood rain’.”

Luckily, fickle as the UK weather is, a sharp drop in temperatures and further rain Saturday will thankfully wash it away and clear the air.