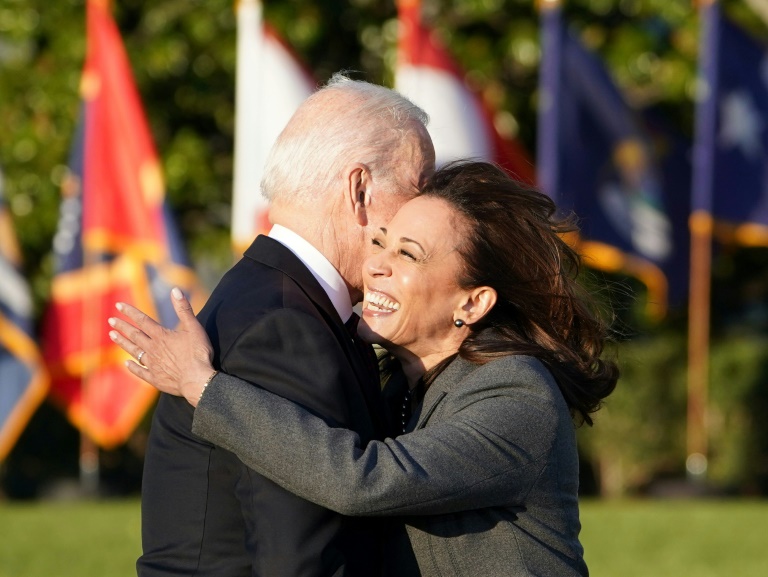 As Joe Biden pops the cork on his alcohol-free birthday bubbly this weekend he will not need to be reminded that he was born as close to the end of Abraham Lincoln’s presidency as he was to the start of his own.

The veteran Democrat, who turns 79 on Saturday, has said publicly he intends to run for reelection but there has been persistent speculation that he could change his mind given his advanced years.

There is usually little intrigue around the nomination when a US president is still in his first term, as no occupant of the White House has declined to seek reelection since Lyndon Johnson more than 50 years ago.

But Biden would be 86 at the end of a second term, and potential successors and their sponsors are already circling, seeing another four years as an assignment too far in Biden’s storied political career.

In a new Politico/Morning Consult poll, only 40 percent of voters surveyed agreed with the statement that Biden “is in good health,” while 50 percent disagreed — a 29-point shift over a year.

“If his health declines, as sometimes happens in one’s 80s, his plans might change,” said David Greenberg, a journalism and history professor at Rutgers University in New Jersey.

“That would create a wide-open field, with many of the 2020 runners-up as possibilities, as well as a lot of people who didn’t run.”

If Biden were to become the nation’s first octogenarian presidential candidate, he would be somewhat undermining the status he gave himself during the campaign as a “bridge” to the next generation — taken by many as a tacit assurance that he would not seek a second term.

History-making Kamala Harris — the first woman and first Black and Asian American ever sworn in as vice president — would be the heir apparent.

But her halo has slipped amid a run of negative press alleging dysfunction among her staff, casting doubt on her standing within the administration and reporting her frustrations over her thorny assignments.

Asked by ABC Thursday if she’d spoken to Biden about his plans for the future, Harris said “absolutely not,” adding that the adminstration was focused on infrastructure, national security and other priorities.

She rejected reports that she was feeling misused or wrongly deployed, telling the channel: “We’re getting things done, and we’re doing it together.”

But Harris has struggled to make an impact, with her approval dipping to 28 percent in one survey, and headlines outlining her frustrations over being politically sidelined and set up for failure.

It is not unusual for vice presidents to be assigned some heavy lifting during their time in the West Wing, but Harris has been handed some particularly tough portfolios, from voting rights to the immigration crisis at the southern border.

Overseas, her recent trip to Paris went without hitches, but jaunts to Latin America and Asia have been less successful.

Harris visited Guatemala and Mexico in June as part of her immigration mission, giving an interview to NBC News that was widely regarded as a disaster.

Asked why she had not yet been to the border, Harris replied: “And I haven’t been to Europe… And I mean, I don’t understand the point that you’re making. I’m not discounting the importance of the border.”

Hours after the interview, several US media outlets reported that Harris’s communications chief Ashley Etienne was leaving — “to pursue other opportunities,” according to White House officials — adding to speculation about low morale among the staff.

Amid Harris’s travails, another barrier-breaking Democrat, Transportation Secretary Pete Buttigieg has risen to the fore as the point man on implementing much of Biden’s $1.2 trillion infrastructure package.

But the first openly gay US cabinet secretary is also the face of the supply-chain crisis that right wing media are predicting will ruin the holiday season.

Critics also point to the biggest flaw of his impressive campaign for the Democratic presidential nomination, a glaring lack of support from voters of color.

Three analysts interviewed by AFP — former congressional chief of staff Mark Bayer, University of Toledo politics professor Sam Nelson and Tommy Goodwin, a Washington-based lobbyist — said Harris would nevertheless be the frontrunner in any Democratic succession, with Buttigieg also in the conversation.

“Beyond those two, it’s worth keeping an eye on California Governor Gavin Newsom,” said Goodwin, while Nelson singled out a number of previous hopefuls, including Beto O’Rourke, who is vying for the Texas governor’s mansion in 2022.

From the Senate, Cory Booker is said to be putting out feelers in the critical primary state of New Hampshire, while Minnesota’s Amy Klobuchar is on a book tour and Elizabeth Warren has begun endorsing candidates beyond her Massachusetts base.

But Peter Loge, an associate professor at George Washington University, says any talk of Biden’s retirement would be premature, recalling similar claims about Donald Trump in 2019.

“There is always speculation based on hope and whispered rumors,” Loge told AFP, “most of which isn’t based on more than hope and rumor.”