Actually, Bhutan is one of the very few countries on Earth to lay claim to being a carbon sink, meaning it has negative carbon emissions. This means that the country’s forests absorb more carbon dioxide every year than its factories and other sources of pollution emit.

“According to recent figures, the country emits around 1.5 million tons of carbon annually, while its forests absorb over 6 million tons,” Proudly Carbon Neutral said. Even with this amazing statistic, Bhutan wants to do more. 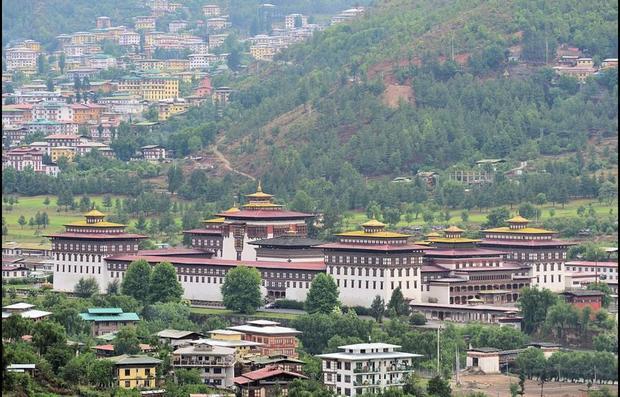 The Tashichho Dzong in Thimphu is the seat of the Bhutanese government since 1952.
Christopher J. Fynn
Bhutan is planning to reach some environmental targets other countries can only dream about, like aiming for zero net greenhouse gas emissions, zero-waste by 2030, and to grow 100 percent organic food by 2020. These are reachable targets in a country that is 72 percent forests, and by constitutional law is required to remain at least 60 percent forested, reports EcoWatch.

The predominate religion of Bhutan is Buddhism, and trees hold special value. “In Buddhism, a tree is the provider and nourisher of all life forms, symbolizing longevity, health, beauty and even compassion,” Tinzin Lekphell told EcoWatch, noting that it’s not a coincidence the Buddha attained enlightenment under a banyan tree.

To celebrate the birth of the first child of King Khesar and Queen Jetson, all 82,000 households in Bhutan planted a tree in celebration of the birth of the crown prince, while volunteers planted another 26,000 trees around the country, for a total of 108,000 new trees. 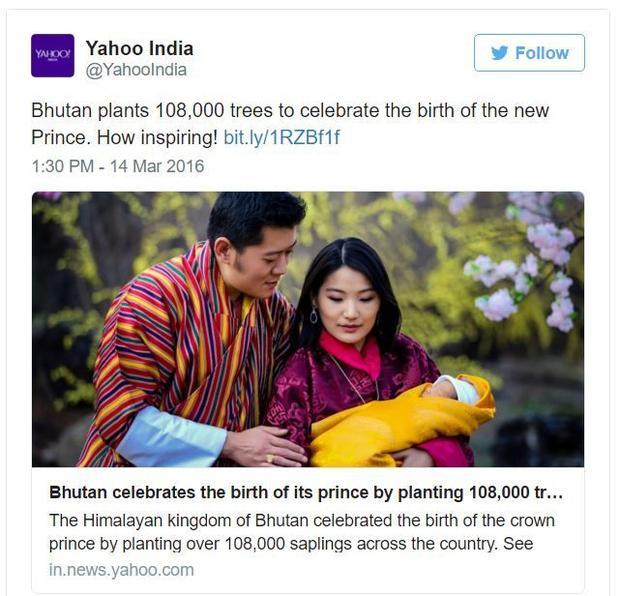 Yahoo India
Bhutan does not measure it’s country’s success by its Gross National Product. Instead, their success is based on Gross National Happiness. Rather than focusing solely on economic indicators, non-economic aspects of life are given equal importance.

Bhutan is also planning to decrease its reliance on hydropower and electricity imports in the winter. It is looking into wind, biogas and solar as energy sources. The government has recently formed a partnership with Nissan to provide electric cars to the country, promising to acquire thousands more.

Bhutan is a country vulnerable to climate change, yet it is fighting to remain carbon neutral in a world where economic growth is more important than the environment. As a developing country, the government will have to be very careful in balancing economic growth with environmental targets.