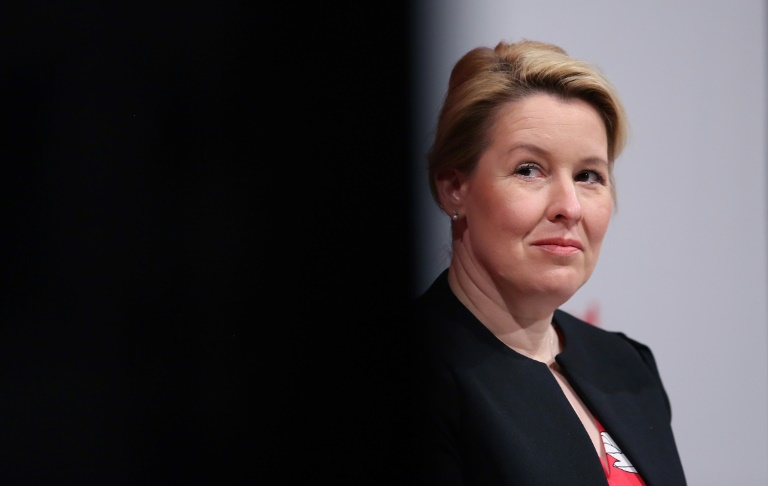 A leading candidate standing for Berlin mayor in September was stripped of her doctorate Thursday over plagiarism charges weeks after she resigned from Chancellor Angela Merkel’s cabinet over the affair.

Berlin’s Free University said it was rescinding Franziska Giffey’s PhD title — often seen as an important bona fide in German politics — after a review of her 2009 doctoral thesis.

It said its board had reached “unanimous agreement after a comprehensive review”, concluding that Giffey was awarded the title “on the basis of deception about the independence of her scientific work”.

Giffey said in a statement that she denied any intent to commit fraud but accepted the decision.

Last month Giffey stepped down as federal family affairs minister due to the negative headlines over her degree but said she still intended to run as the Social Democrats’ candidate for Berlin mayor in elections in September.

The Social Democrats (SPD) currently lead the city-state’s government and serve as junior partners in Merkel’s right-left coalition. Giffey has long been seen as one of the SPD’s most promising young talents.

The SPD is currently polling at around 20 percent in the capital, behind the Greens at around 25 percent.

Giffey, 43, had been dogged by claims of plagiarism since 2019, when the Free University opened a probe into her doctoral thesis on European politics.

The VroniPlag Wiki platform said some 49 of the 265 pages of the thesis showed signs of plagiarism, ranging from unattributed quotes to copying and pasting from other works.

The university had initially ruled that Giffey could retain her “doctor” title but issued a reprimand, fuelling further suspicions about her work.

A new investigation was opened in 2020, leading to Thursday’s findings.

Several top-flight politicians have run into trouble often decades on over their academic work, sparking a national debate about the value of the accolades and their outsize role in German society.

Former defence minister Karl-Theodor zu Guttenberg and education minister Annette Schavan were forced to resign in 2011 and 2013 respectively over allegations of plagiarism.

European Commission President Ursula von der Leyen, previously German defence chief, faced similar accusations in 2015 but was cleared by the Medical University of Hanover despite “obvious shortcomings” in the attribution of references.