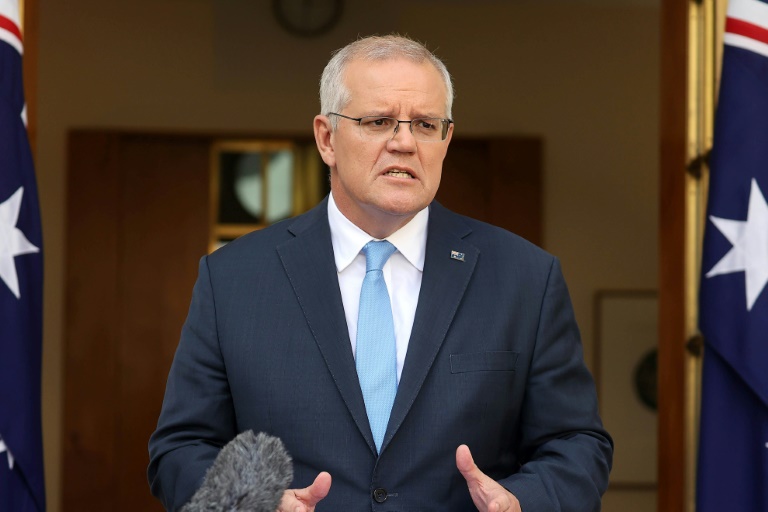 Australian Prime Minister Scott Morrison urged a calm response Thursday after the Solomon Islands’ leader cited an “invasion” threat and said his nation was being treated like an infant wielding a handgun.

Morrison, who faces federal elections May 21, has been battling criticism of his government’s foreign policy after the Pacific island nation signed a security pact with China last month.

The China deal raised alarm in Australia and the United States, which fear it may give Beijing a military foothold in the South Pacific less than 2,000 kilometres (1,200 miles) from Australia’s coast.

“We need to be calm and composed when we deal with these issues,” Morrison told journalists Thursday.

The Australian leader said he was concerned for the security of the Solomons and the Pacific after Prime Minister Manasseh Sogavare signed the “secret arrangement” with Beijing.

Morrison insisted his government treated the Pacific “family” as an equal.

But Sogavare was irritated by US and Australian criticism of the deal.

“We deplore the continued demonstration of lack of trust by the concerned parties,” Sogavare told parliament Tuesday, adding there was “nothing to be concerned about” with the pact.

Without naming countries, Sogavare said there had been a “warning of military intervention” if other countries’ interests were undermined in the Solomons.

“In other words, Mr Speaker, we are threatened with invasion. And that is serious,” the prime minister said.

“We are being treated as kindergarten students walking around with Colt 45s in our hands, and therefore we need to be supervised,” he added.

Sogavare’s government severed ties with Taiwan in September 2019 in favour of diplomatic relations with China, a switch that unlocked investment but stoked inter-island rivalries.

Last November, protests against Sogavare’s rule flared into riots in the capital Honiara, during which much of the city’s Chinatown was torched.

Australia deployed about 100 police and military peacekeepers in response to a request by the Solomon Islands. They were joined by forces from New Zealand, Fiji and Papua New Guinea.

But Sogavare said a “personal envoy” of Morrison had briefed him at the time that the peacekeepers would not protect Chinese businesses or China’s embassy.

Chinatown could not be saved “because our police were overwhelmed”, Sogavare said, adding the “rules of engagement” precluded peacekeeper involvement.

The prime minister said Solomon Islands police were unable to assure the Chinese embassy’s protection during the Honiara riots.

China’s ambassador had asked the Solomons government to allow it to bring in 10 “special police protection personnel”, he said, to help secure the embassy.

“Under the UN conventions, we are fully obliged to grant that request,” Sogavare said.

In this article:Australia, Diplomacy, Security, Solomons