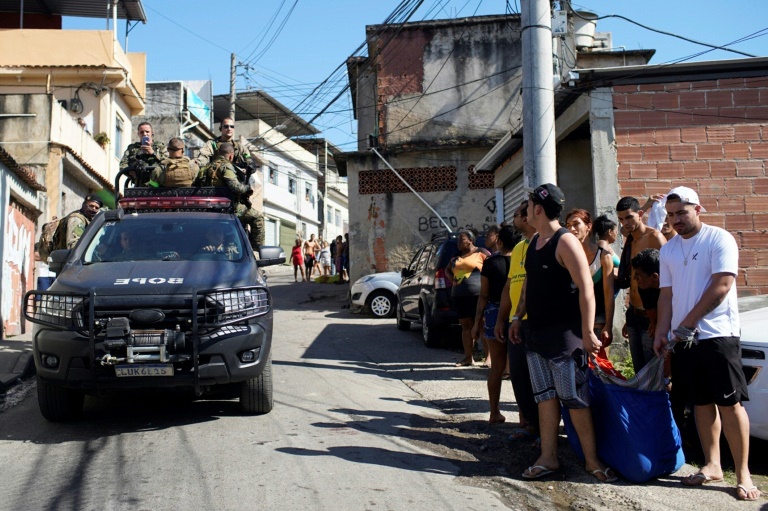 A law enforcement officer and a woman who lived in the area were among those who died in the Complexo do Alemao slum, while the 16 others are believed to be members of organized crime groups, a police spokesman told a press conference.

Some 400 officers were involved in the massive operation, backed up by 10 bullet-proof vehicles and four helicopters.

Their target was a criminal group that had robbed vehicles carrying cargo for banks and other businesses.

Police spokesman Ivan Blaz said the operation’s goal was to stop the “expansionist policy” of criminal gangs in the Complexo do Alemao.

The Public Defender’s office and the Brazilian Bar Association’s human rights commission told AFP separately that they had been informed of 20 people being killed in the raids, including the officer and the bystander.

Colonel Rogerio Lobasso, the lead officer in charge of the operation, expressed his condolences over the 50-year-old woman’s death, which he said is under investigation.

Her boyfriend told news site G1 that police had shot her while they were stopped at a traffic light.

“They shot at the car. I just saw her collapse next to me. When I looked, she had a hole in her chest,” said Denilson Gloria.

Law enforcement authorities defended their officers’ conduct during the operation, saying that units had been “violently attacked” with “military and guerrilla” tactics, while accusing the alleged gang members of using civilians as human shields.

Police often carry out raids in Rio’s slums in a bid to fight organized crime and drug trafficking.

In May, 22 people were killed, also including a female bystander, in an early morning raid of the Vila Cruzeiro favela.

That came almost a year after Rio’s deadliest police raid, in which 28 people were killed in the Jacarezinho slum.

Like the raid in May, Thursday’s police operation was criticized by locals for the use of overwhelming force.

Activists have denounced official abuse during such anti-crime operations, including extrajudicial killings of suspects, which they say often goes unpunished.

Rio police officers were meant to begin wearing body cameras this year, which some security experts believe may help prevent some, but not all, problems of police abuse.

It was not immediately clear whether police were wearing body cameras during the Complexo do Alemao raid.

In this article:Brazil, Gangs, Police, violence