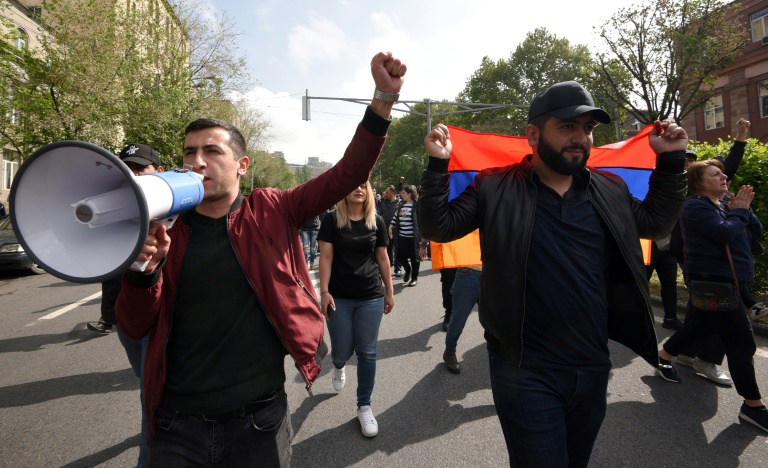 Police in Armenia on Tuesday detained more than 200 anti-government protesters as opposition parties upped pressure on Prime Minister Nikol Pashinyan over his handling of a territorial dispute with Azerbaijan.

Protests erupted in Yerevan on Sunday with the opposition demanding Pashinyan’s resignation accusing him of plotting to cede to Baku all the disputed Nagorno-Karabakh region over which the two countries went to war in 2020.

Fresh demonstrations took place on Monday and on Tuesday morning police cracked down on protesters who blocked traffic in central Yerevan, provoking chaotic scenes and the largest protests in the country since elections last September.

The interior ministry said “237 demonstrators were detained” in Yerevan and several provincial cities.

The protests highlight bitterness over Pashinyan’s leadership since the six-week war in 2020 that claimed more than 6,500 lives before ending with a Russian-brokered ceasefire agreement.

Armenia and Azerbaijan have been locked in a decades-long dispute over Karabakh, Azerbaijan’s Armenian-populated region.

Armenia’s security service warned Saturday of “a real threat of turmoil in the country,” but Pashinyan’s ally and parliament speaker Alen Simonyan downplayed the risk of instability, insisting “there is no political crisis in Armenia.”

“Political forces, which lost parliamentary elections in 2021, are aggressively trying to mount a wave of protests, but our citizens have already made their choice and will stay away from their attempts,” he told a news conference Tuesday.

Opposition leader and parliament vice speaker Ishkhan Saghatelyan said: “Pashinyan is a traitor and permanent street protests, which are mounting, will force him to resign.”

He called for a protest rally later Tuesday in Yerevan’s central Square of France where thousands rallied against Pashinyan on Sunday and Monday.

“Nikol must go, he will go, because he is a symbol of defeat and Armenia has no future with such a leader,” said 57-year-old blacksmith Sergei Hovhannisyan, one of the protesters.

“He is ready to give away Karabakh for which we have shed our blood,” he told AFP.

Opposition parties accuse Pashinyan of plans to give away all of Karabakh to Azerbaijan after he told lawmakers last month that the “international community calls on Armenia to scale down demands on Karabakh”.

Under the Moscow-brokered deal, Armenia ceded swathes of territory it had controlled for decades, and Russia deployed some 2,000 peacekeepers to oversee the truce.

The pact was seen in Armenia as a national humiliation and sparked weeks of anti-government protests, leading Pashinyan to call snap parliamentary polls which his party, Civil Contract, won last September.

Ethnic Armenian separatists in Nagorno-Karabakh broke away from Azerbaijan when the Soviet Union collapsed in 1991. The ensuing conflicts claimed around 30,000 lives.