The Argentine black and white tegu, Salvator merianae, is a species of lizard in the family Teiidae. This particular species is the largest in the family of tegu lizards, with males reaching up to 4.0 to 4.5 feet (120–140 centimeters) in length.

It is an omnivorous species that inhabit the tropical rain forests, savannas, and semi-deserts of Argentina, Brazil, Paraguay, and Uruguay. Tegus are sometimes kept as pets, and are known for their unusually high intelligence and can be housebroken. From 2000 to 2010, over 79,000 live imports of tegus have come from South America, according to USGS biologist Amy Y. Adams.

They usually end up far from home, quite often in the U.S. where they either escape or are released into the wild when they become too big to take care of or people get bored with them. This has been going on for at least a decade, starting in Florida, with the tegu spreading into other southeastern states. 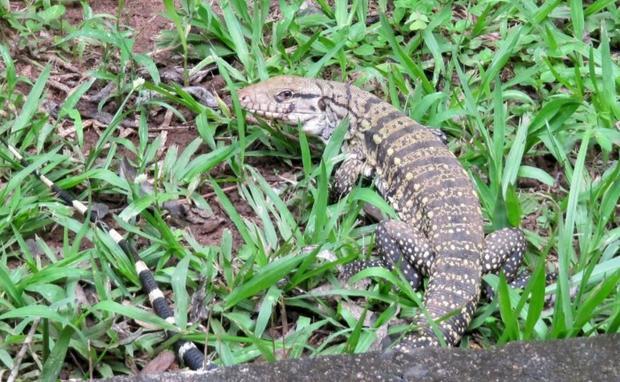 The tegu has now been found in four South Carolina counties. There are also isolated sightings in Louisiana, Texas, Alabama, and Central Florida, according to Nature World News.

Two Georgia counties, Tattnall and Toombs, have fairly good-sized clusters of the invasive species, but there are reports of appearances elsewhere in the state. Six have been trapped in 2020 in those counties, while others were wither killed by landowners or became roadkill on the highways. One trapper in south Florida tells WSVN that he’s caught 1,800 just this year.

It’s fairly obvious these creatures are breeding, and according to biologists, the tegu’s invasion is getting worse. Their wild population may be starting to become too large. Currently, there are no confirmed counts or estimates for the number of wild tegus on American soil.

But with global warming, the southern tier of U.S. states makes for a perfect natural environment for the lizards. And as the climatological zones continue to shift to the north, this may increase the ideal range for tegus to spread even further in North America. 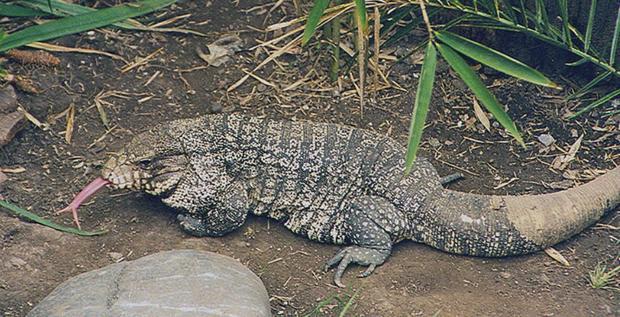 The is the largest of the Tegu lizards, found in southern Brazil and northern Argentina. It is known as Salvator Merianae, and is one of the species called Largato Overo. Buenos Aires Zoo.
Dick Culbert from Gibsons, B.C., Canada (CC BY 2.0)

The tegu will eat just about anything
Tegus – being omnivorous – will eat just about anything they come across, from low-growing fruits and vegetables to small animals – but their favorite food is eggs. In Venezuela, the tegu is called a chicken wolf or el Lobo pollero, because they like to steal eggs in chicken-coops. This also means they will eat the eggs of other native species that lay eggs on the ground.

This means the threatened Eastern indigo snake, gopher turtles, the American crocodiles, and American alligators, as well as many ground-nesting birds, are at risk.

If many more escape captivity or are let loose by owners, “there is the potential for a very large population in the wild,” Adams says. She adds “the entire southeast portion of the United States” offers a suitable habitat and is therefore at risk.

In this article:argentine black and white tegu, Georgia and south carolina, Invasive species, pet trade in Florida, up to 4 feet in length