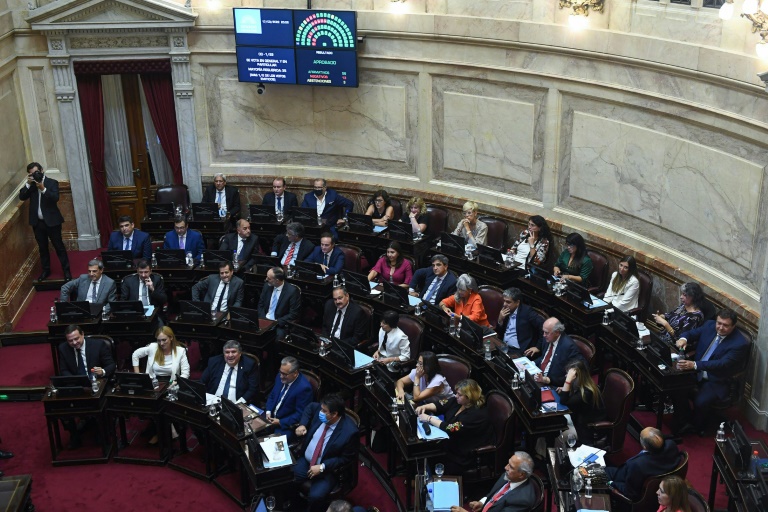 Argentina’s Senate on Thursday gave final approval to an agreement with the International Monetary Fund that restructures a $45 billion debt, clearing the country’s short-term financial horizon but leaving a serious inflationary challenge.

The late-night vote greenlights the new credit program ironed out between Argentine officials and IMF staff as they sought to finalize the debt, the legacy of a record loan contracted in 2018 by the  government of former president Mauricio Macri.

Outside the Senate, several hundred people demonstrated, called by unions and leftist movements to oppose the restructuring.

Last week, the agreement won the approval of the Chamber of Deputies with a broad consensus between the center-left ruling coalition and the center-right opposition, a rarity in Argentina.

Faced with the spectre of a ruinous payment default if the agreement was not approved, the Senate also easily approved the agreement by a vote of 56 to 13, with three abstentions.

“It is the responsibility of our government to build certainty in a context of uncertainty,” Economic Minister Martin Guzman, chief architect of the agreement with the IMF, said in defending the package before senators.

The agreement between Argentina and the fund provides for a series of macroeconomic measures to control the country’s chronic inflation (50.9 percent in 2021) and reduce its budget deficit of three percent of GDP last year until it is balanced in 2025.

Under the agreement, the IMF will monitor Argentina’s progress regularly.

In 2018, under the government of center-right Macri, the IMF approved its biggest-ever loan of $57 billion to Argentina. The country received $44 billion of that amount.

Macri’s successor, Alberto Fernandez, refused to accept the rest, seeking also to renegotiate repayment terms. Payments of $19 billion and $20 billion were due this year — a timeline the government considered impossible.

Argentina is just emerging from three years of economic recession and battling rising inflation and a high poverty rate.

In this article:Argentina, debt, Government, Parliament